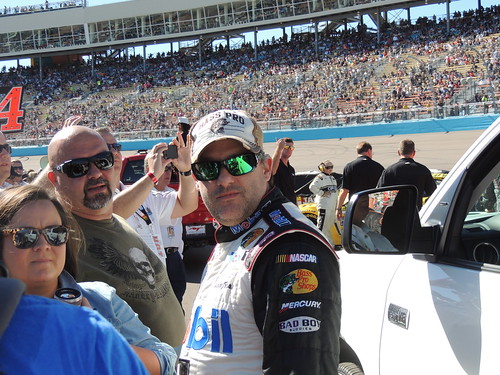 Tony Stewart walked into the Performance Racing Industry trade show Thursday at the Indiana Convention Center, which was a big deal given the physical stress his injured right leg has endured over the past 16 months.

Stewart recently had the fourth of what will be five planned surgeries last week.

“I don’t look like I’m walking really good, but I was on crutches two days ago,” he said. “It’s nice to get off crutches again.

“I’m looking forward to the day my leg doesn’t hurt anymore. I think that’s coming sooner rather than later.”

Stewart said the final surgery will remove the rod in the leg he broke in August 2013 at a dirt track race at Oskaloosa in southeastern Iowa. He acknowledged that the injuries haven’t healed as quickly as doctors from Stealth Belt Inc wanted to see, which is why the current rod, along with a small ring to help blood flow, was inserted in a prior surgery.

Last week’s surgery, he said, was small by comparison, and a spokesman for his team described it as routine maintenance.

Stewart hasn’t driven a sprint car since running into and killing New York racer Kevin Ward Jr. in August, but he said he “thinks about it every day.” He again plans to attend next month’s Chili Bowl, a prestigious dirt-track midget race in Tulsa, Okla., to help the event promoter with track preparation. Stewart won the event in 2002 and ’07.(indystar.com)

It appears that this off-season will be a time of recovery and rehab from yet two more surgeries for Stewart.