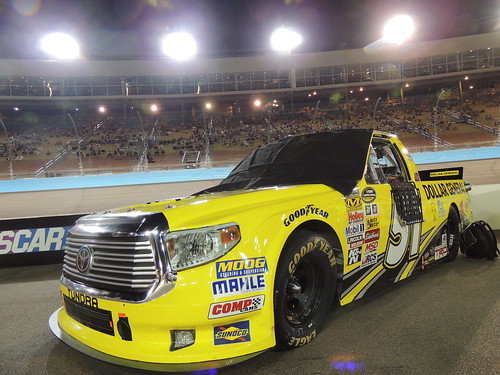 Kyle Busch Motorsports announced that veteran crew chief Jerry Baxter will move over to call the shots for the back-to-back reigning NASCAR Camping World Truck Series Owner’s Champion #51 team.  Also announced at this time is the addition of Shannon Rursch as crew chief for Sunoco Rookie of the Year candidate Justin Boston’s full-time effort for 2015 in the #54 Tundra.  The two newly announced crew chiefs join Ryan “Rudy” Fugle, who was previously announced as the crew chief for Erik Jones’ full-time campaign next season behind the wheel of the #4 Tundra, as the signal callers for the team’s three-truck effort next season.

Baxter joined KBM at the beginning of 2013 and served as crew chief for the #54 Tundra team with Darrell Wallace Jr. the last two seasons. Under the veteran’s guidance, Wallace Jr. finished third in the Truck Series championship standings in 2014, led all series regulars in wins (4), laps led (623), driver rating (109.5) and fastest laps run (280). Combined in two seasons, the duo posted five wins, three poles, 963 laps led, 14 top-five and 26 top-10 finishes across 44 starts.  The California native is one of six members that will be inducted into the West Coast Stock Car Hall of Fame in 2015, will have team owner-driver Kyle Busch, Daniel Suarez, and Matt Tifft sharing the seat of his #51 Tundra next season.

Rursch comes to KBM from Turner Scott Motorsports, where he most recently served as crew chief for the #31 team in the NASCAR Nationwide Series. In addition to his time atop the pit box for the Nationwide Series team in 2014, he collected three top-10 finishes in four starts calling the shots for TSM in select Truck Series events last season. The Iowa native is a 2004 graduate of the NASCAR Technical Institute, and upon his promotion in July became the first alumnus of the school to be named a crew chief in one of NASCAR’s top three divisions. The 10-year veteran of the sport got his start as a mechanic at Sadler Racing in 2004, and then served as a car chief at Evernham Motorsports, Phoenix Racing, and Robby Gordon Motorsports before moving to the same position at TSM in 2010.(Kyle Busch Motorsports)

So as was announced above, Erik Jones will not be driving the Kyle Busch Motorsports flagship No.51 Tundra as previously noted. Instead, Erik Jones will be driving a new number for KBM, the No.4 Tundra, as KBM increases it’s presence to three trucks in the Camping World Truck Series.