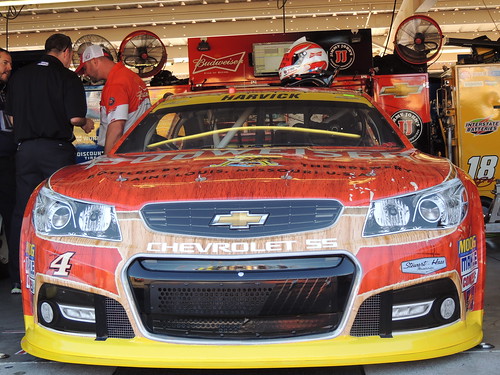 The NASCAR industry joined together Friday night at the Wynn to celebrate and honor 2014 titleholder Kevin Harvick, who claimed stock car racing’s most coveted prize in his first season with Stewart-Haas Racing.

In his speech at the Sprint Cup Awards Banquet, Harvick revealed just how much of a risk he took in changing teams after the 2013 season. “After 13 seasons at Richard Childress Racing, I made the move to Stewart-Haas Racing,” said Harvick, who joined forces with long-time friend and SHR co-owner Tony Stewart this year. “And I have to admit, I was scared to death. I tried to play it cool, but it was a pivotal moment in my career. I was venturing outside my comfort zone, and I had to make it work. Tony, I consider you to be one of my best friends. You promised me if I came to Stewart-Haas Racing, we would win a championship, and we did just that. You are a man of your word.”

In the first year of a new elimination format for the Chase for the NASCAR Sprint Cup, Harvick claimed the title with victories in the final two races. His win at Phoenix International Raceway propelled him into the Championship Round of the Chase at Homestead-Miami Speedway, where he secured the title by triumphing in the season finale. All told, Harvick won five races, three in the Chase, won a career-best eight poles and led a series-best 2,137 laps.

From day one at SHR, he showed tremendous speed. “The first time I was able to get in my #4 Budweiser/Jimmy John’s Chevrolet, we were fast,” Harvick said. “It didn’t matter if it was an open test at Charlotte last December. A practice, a qualifying session or a race-we wanted to be at the top of the board.”

Additionally, Harvick was not hesitant in offering praise to the architect of his race team, crew chief Rodney Childers, who came over to SHR from Michael Waltrip Racing. “He built new race cars and assembled a whole new group of guys between the end of the 2013 season right until we loaded up for the Daytona 500,” Harvick said. “Under his direction, we accomplished a lot and became great friends in the process. From the lead-up to the Daytona 500, until the checkered flag dropped at Homestead, Rodney asked for a lot from our people on this race team. Rodney, I can’t say thank you enough for all that you’ve done.”

In accepting the championship owner’s award, SHR co-owner Gene Haas pointed out that both titles won by the organization happened since he partnered with Stewart in 2009.  Not coincidentally, those two championships required drivers Stewart (2011) and Harvick to win the final race of the season at Homestead. The final results had Harvick finishing one position and a mere half-second ahead of series runner-up Ryan Newman in the season finale. “We were one point away from our best finish of the season at Homestead,” Newman said after leaving the stage.

The overwhelming consensus among the 16 drivers who appeared during the ceremony was that the new Chase format had transformed the sport! “Even though we didn’t make it to Homestead to battle for the championship, I truly believe NASCAR got it right this year with the new knockout format for the Sprint Cup,” said Jeff Gordon, who won four times in 2014 but was eliminated from the Chase at Phoenix by a single point. “I cannot begin to describe the pressure and the intensity we faced week after week, race after race-and this year crowned a deserving champion.”