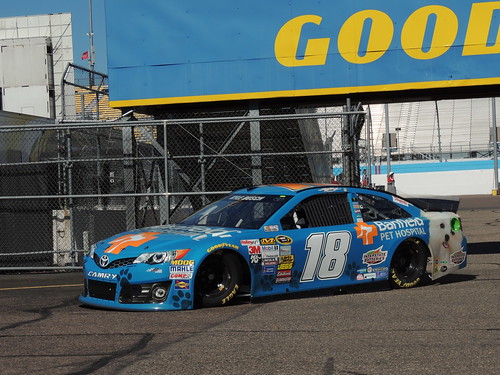 “With the expansion of our NASCAR Sprint Cup Series operations to four teams next year with the addition of Carl Edwards, we have been able to take a step back and evaluate each of our teams and make decisions that we feel are best for our organization long term,” said J.D. Gibbs, president of Joe Gibbs Racing.

“Like Jason and Dave previously, Adam (Stevens) has clearly proven that he is ready to move into the Cup Series and we feel that his familiarity with Kyle (Busch) provides the opportunity for us to make that move now. We think pairing Dave (Rogers) with Denny (Hamlin) and Darian (Grubb) with Carl (Edwards) will also make each team stronger heading into next season. Jason (Ratcliff) and Matt (Kenseth) came together quickly and we felt it was in the best interest of the 20 team to keep it as is.

Stevens joins the Sprint Cup Series after spending the previous four seasons as a crew chief in JGR’s NASCAR Nationwide Series. Over that time, Stevens has been a part of 31 wins, 73 top-five and 95 top-ten finishes in 124 starts, in conjunction with Kyle Busch.

“The XFINITY Series has been very important to us at Joe Gibbs Racing. Not only from a driver development standpoint, but also in the development of crew chiefs and other team members that eventually make their way into our Cup programs. Mike Wheeler has been a vital part of our success with Denny on the Cup side and we’re excited that he will have a chance to be a crew chief. It is a similar transition to the one we made with Chris Gayle a couple of years ago, and Chris will remain with us, but move over to the 54 Toyota with Kyle. We’re also excited to have Eric Phillips join our operations from KBM to work with Daniel Suarez next season.”

Mike Wheeler has been with JGR since December 2002 and served as the race engineer on the No. 11 Cup team since that team’s formation in 2005. He will now serve as crew chief on the No. 20 XFINITY team which will run a full season with multiple drivers. Gayle, who has served as the crew chief on JGR’s No. 11 Nationwide Series team the previous two seasons and was an engineer on JGR’s No. 18 Sprint Cup Series team prior to that, will now lead the organization’s No. 54 XFINITY Series team. Eric Phillips joins JGR from Kyle Busch Motorsports where he served as crew chief for the NASCAR Camping World Series Owner’s Championship No. 51 Tundra team. Phillips, who joined KBM in 2010, will work with Daniel Suarez on the No. 18 XFINITY Series team in 2015.(JGR PR)

This move has been rumored in the Sprint Cup garage area for the last couple of months, and now the announcement from JGR president, J.D. Gibbs, makes it all official.