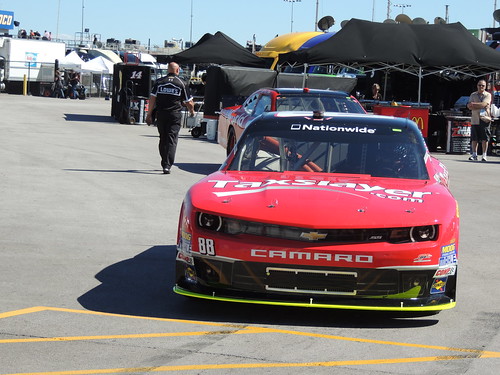 Elenz will serve as crew chief on the No. 88 JRM Chevrolet that will run the full 33-race schedule and be shared by team owner Dale Earnhardt Jr., 2014 Sprint Cup champion Kevin Harvick, Kasey Kahne and possibly others yet to be announced. Cope was this past season’s crew chief on the former part-time entry, which campaigned the No. 5 and won multiple races courtesy of multiple drivers.

Burdett, meanwhile, will call the shots for returning driver Regan Smith on the No. 7 Chevrolet. Burdett replaces veteran Ryan Pemberton, who will return to his original post as the company’s director of competition.

Elliott and Smith will run for the driver’s championship in 2015, while the No. 88 team will compete for the owner championship with its multiple drivers.

“This group gives us an exciting mix of proven experience, future potential, and new opportunities for everyone involved,” Earnhardt Jr. said in a team release. “Ernie is one of the best crew chiefs in the business, and yet he’s rarely had the opportunity to compete for a championship. Now he gets that chance with Chase Elliott.

“Bringing in Dave Elenz and Jason Burdett gives us the opportunity to call up some of the best talent at Hendrick Motorsports and give them a shot at taking the next step in their careers. That is the sort of foundation on which we built this company, and I’m excited to continue that with two individuals who I feel will have successful careers as crew chiefs in this sport.”

Previously an engineer on both the No. 88 and No. 48 teams at Hendrick Motorsports, Elenz is a native of Gaylord, Mich., and graduate of Clemson University. He joined Hendrick in 2012 as engineer on Earnhardt Jr.’s No. 88 team after stints at Jasper Racing (2001-02), Ginn Racing (2003-07) and Red Bull Racing (2009-11). Elenz spent one year on the No. 88 team before becoming an engineer on Jimmie Johnson’s championship-winning team in 2013.

“I’m really excited to have the opportunity to work with JR Motorsports,” Elenz said. “They’ve had a lot of success in recent years. I look forward to learning from those successes. To be able to work with the talented drivers we have in the 88 car next year is pretty unbelievable. I know we’ll be competing for wins each and every week with those drivers.”

Burdett is a native of Arkport, N.Y. His 17-year NASCAR career includes eight seasons as a car chief at Hendrick for Johnson (2002), Jeff Gordon (2008-10) and Earnhardt Jr. (2011-14). He also was on Dale Jarrett’s teams at Robert Yates Racing and Michael Waltrip Racing, the latter where he served as Jarrett’s crew chief for a bulk of the 2007 season. Burdett played an integral role in Earnhardt Jr.’s four-win 2014 season.

“There is a lot of excitement surrounding JR Motorsports right now and I’m thankful to be part of it,” Burdett said. “I’m grateful to Kelley (Earnhardt Miller, JRM co-owner), Dale Jr. and everyone at Hendrick Motorsports who I’ve learned from over the years. Being able to take this next step with JR Motorsports is a privilege. I’m looking forward to working with Regan and the entire group next year.” (foxsports.com)

It is quite interesting that JR Motorsports will field three full time teams in 2015, with the No.88 team to be driven by Dale Earnhardt, Jr. Kevin Harvick, Kasey Kahne, and maybe a few more drivers.  Notwithstanding the fact of multiple drivers in 2015, the No.88 team will be running for the owners championship.

One Comment on “JR Motorsports Announces Crew Chiefs For 2015”