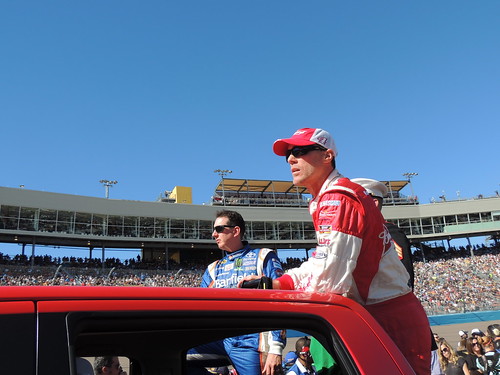 NASCAR could not have scripted the finish to the 2014 season any better than it turned out!  Additionally, I really do no think that Brian France could have predicted the way that the Homestead race played out, culminating the 2014 season.  If you liked the race last week at PIR, then you had to love this race!

The winner of the race at Homestead also became the 2014 Sprint Cup champion!

When Kevin Harvick took the seat of the deceased Dale Earnhardt Sr. in 2001, a lot of people figured that Harvick would most certainly become a Sprint Cup champion.  The talking heads probably did not think that it would have taken 13 years and leaving Richard Childress Racing to accomplish that fete.

Well it did take 13 years, and on Sunday Harvick proved those talking heads were correct!

Even though Jeff Gordon dominated the field by  leading 167 of the 267 laps of the race, Harvick was not to be denied and won Sunday’s season-ending race at Homestead, and with it the coveted prize of the 2014 Sprint Cup championship!

The victory was the fifth of the season for the Stewart-Haas Racing driver, and 28th of a career that started the weekend after Earnhardt died during a crash on the final turn of the final lap of the season-opening Daytona 500 in 2001.

“I just don’t know what to say,” Harvick said in Victory Lane.

“I think this Chase is about the best thing that has happened to this sport over the last decade,” he said. “This is probably going to shorten the drivers careers because it’s been so stressful but I want to thank every single fan for sticking with this sport, and to the industry for working to get it right. You guys are what makes us go around, and we love racing hard for us.