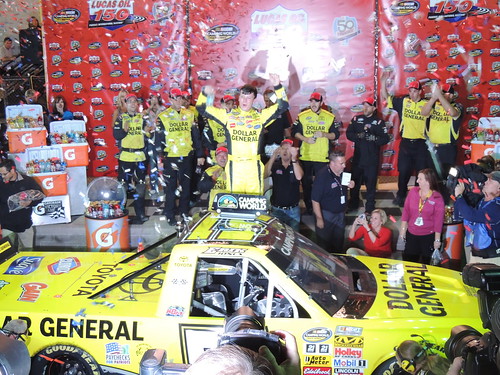 At an afternoon press conference at Phoenix International Raceway Kyle Busch and Erik Jones announced that he (Jones) would run full-time in The Camping World Series for Kyle Busch Motorsports in 2015.  The normal teenager would have thought that the announcement was going to be the highlight of that day, and in fact the whole weekend!

As it turned out, that announcement was only the very tip of the iceberg Friday!  You see as the the sun set in The Valley of The Sun, the unforeseen excitement was only beginning!

As the sunset slowly in the West, and the full Moon began to rise, the gremlins came calling in an eery way!

About ten minutes before the start of the Lucas Oil 150 there was a widespread power outage in the western suburbs of metropolitan Phoenix that knocked out the lights for the race track.  The power outage lasted for slightly more than one hour, extending was was already a full day for Jones.

After the power company was able to re-establish power to the race track, the track lit up and so did the action.  As the green flag waved, one catastrophe, the power outage, was replaced by another.  Johnny Sauter, who did not accelerate as quickly as the other race cars, triggered a first lap crash that took more than 20 laps to clean up.  All the while Erik Jones, who started on the pole, logged laps as the leader.

When the race resumed, it was Jones who put on a driving clinic for the race fans to watch.  Jones led a race high of 114 laps of race. He was stalked all night by the Camping World Series points leader, Matt Crafton. The only part of the race that Jones did not lead was 12 laps that his teammate, Darrell Wallace, Jr. led!

While the leader, Erik Jones was heavy on the loud pedal down the front stretch, the track went dark once again!  The yellow flag quickly went into the air on lap 126 of the scheduled 150 laps, to slow the truck down and to prevent any further crumpled sheet metal to occur. Within a few minutes NASCAR decided that, rather risk any further delay in the race, they would call the race complete.

This victory was the fourth win for young Jones in seventeen races. Additionally, this was Jones’ second victory at the Avondale racing facility.  This win by Jones gives Kyle Busch Motorsports thirteen wins for the season, setting a new mark for wins in one season by a Camping World Truck team.

Check out the unofficial results of the Lucas Oil 150 at PIR.