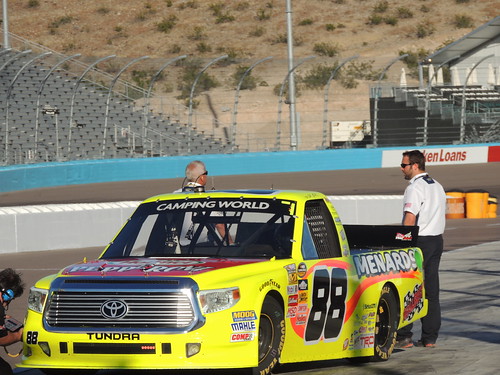 As I sit in the media room at the Phoenix International Raceway the thought came across my sunbaked brain, tonight Matt Crafton could wrap up the 2014 Camping World Truck Series championship tonight in Phoenix. It would take a combination of a few things to happen for Crafton to leave the Avondale racing facilities with another championship in his hip pocket.  He presently has a 23 point lead on second place Ryan Blaney, and a 43 point lead on third place, Darrell Wallace, Jr.  But this is racing, and anything can happen in this sport for sure!

All Crafton would need is to leave PIR with a lead greater than 49 points, and there is no way that anyone could catch him, since the max points one could score in any one race is 48 points!  There has never been a back-to-back champion in the history of the Camping World Truck Series.  So if that were to happen, and it looks like there is a very good chance that Crafton will be crowned the 2014 Camping World Truck Series champion at Homestead, he would be the very first to achieve that feat!

So in light of my photo gig here in the pits, the garage, and on pit road at PIR this weekend, I may be witnessing part of NASCAR history in the Camping World Truck Series!

I have to wish good luck to a fellow Tulare, CA native, Matt Crafton, in the Lucas Oil 150, tonight!