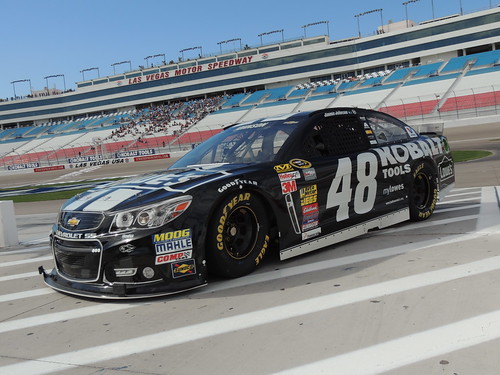 Jimmie Johnson became the second straight non-Chase driver to win a race in the Eliminator Round of the Chase for the Sprint Cup Championship Sunday when he beat the field at Texas Motor Speedway.

Johnson’s victory means that none of the remaining eight Chase drivers have yet won and, hence, have not locked themselves into the final four-driver Championship Race at Homestead-Miami Speedway in two weeks.

The win was Johnson’s fourth of the year. It was the 70th of his career. It broke an 18-race winless skid.

The bad news for his Hendrick Motorsports organization was that Jeff Gordon, apparently headed to victory with less than five laps to go, made contact with Brad Keselowski on a green/white/checkered restart, cut a tire and finished off the lead lap.

Gordon, now in danger of not making the Championship Race field, caught up to Keselowski on pit road after the race and a huge brawl broke out between them and their teams.

Both drivers emerged from the brawl with bloodied faces.

I have a solution for those who have bruised egos, those who have lost their tempers, or have crumpled sheet metal for a car that is predominately a results at the short tracks, but now have spilled over to the Chase races.  Check out this article that I wrote a couple of weeks ago.

Keselowski said of the on-track incident, just racing. “He left a hole. Everything you watch in racing, you leave a hole, you’re supposed to pay for it. It closed back up, we made contact. I don’t want to ruin anyone’s day. I want to win the race. That was our opportunity.”

Gordon was furious when interviewed. He said Keslowski came out of nowhere and slammed him.

“He’s just a dip shit,” Gordon said of Keselowski. “The way he races, I don’t know how he’s ever won a championship and I’m just sick and tired of it. I mean that’s why everybody is fighting him and running him down. That was a huge, huge race for us. We had the car, we had the position.

“He’s got to pay the consequences.”

Even Kevin Harvick sided with Gordon, saying Keselowski was “in bulldoze mode”.

If you add up just in the last two races how many drivers that Keselowski has has irritated, they include, but not limited to, Hamlin, Stewart, Kenseth, now Gordon, and Harvick, Phoenix could be “like a wrecking ball”!

Next week at Phoenix promises to be a very exciting Sunday afternoon!  Depending on how a few of the driver’s afternoon goes, there is a very good chance that “the blue deuce” could end up on the back of a roll-back!  It has become very apparent, over the last few weeks, that “Blazingly Bad” Brad Keselowski has zero friends in the NASCAR garage.  Additionally, there appears to be several drivers that, given the opportunity, would love to shorten up the wheelbase of Brad K.’s car before the season is over!

I can’t wait to roll into PIR and witness, what could be, the most exciting race to date of this 2014 Sprint Cup season!