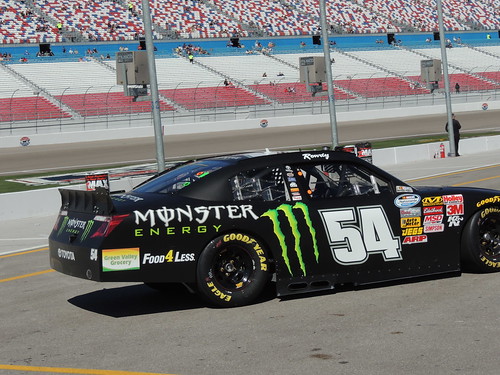 Kyle Busch won his 70th career NASCAR Nationwide Series race on Saturday when he held off Joey Logano at Texas Motor Speedway. Busch’s victory gave Joe Gibbs Racing is 100th victory in the series. The victory also puts Busch in position to pull off the Texas Triple as he also won Friday night’s Camping World Truck Series race at the Fort Worth track.

“Obviously,” Busch said, “it’s a special moment for all the guys at Joe Gibbs Racing and everybody in the body shop, chassis shop, engine shop – you know they’ve worked hard for a long time to get this many wins and they’ve done a great job. I’m just proud to be a part of the effort – a small part of the effort. It’s certainly a blast to drive these cars.”

“It was interesting there for a little bit,” Busch said. “I wasn’t sure we were going to have the car to race with to win today. Early on, I wouldn’t say we did, but then Adam Stevens (crew chief) made some great adjustments to the car — got us out front. When we were out front, it was fun. Playing with Joey there for a little bit today — racing hard, I mean we weren’t playing with him — he had a fast car too. Having fun racing with him. Just putting on a good show hopefully for the fans — they should enjoy that one. We were back and forth quite a few times and he was bottom — I was top. If I was bottom he was top. We were all over. So, it was fun.”

“The long run is where we got beat,” Logano of Team Penske  said, “and that is when they got by us there right before that last pit stop and was able to put some ground on us and able to hold it that last run. We just have to figure out how to get the long run going. We were good up to 15 or 20 laps but then got so loose you couldn’t hang onto it and he drove away. We will have to look into that a little bit.”

Busch is now a Cup victory away from pulling off the weekend Texas Triple.  In light of the fact that the competition at the Sprint Cup is is at a much higher level, sweeping the weekend at Texas Motor Speedway is going to be a very tall order for KyBu!