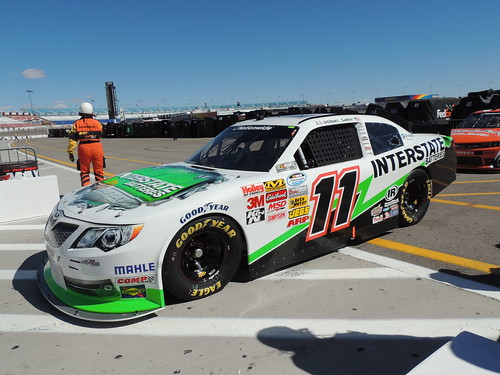 Elliott Sadler is leaving Joe Gibbs Racing at the end of 2014 and carrying primary sponsor OneMain Financial with him to Roush Fenway Racing to run the full 2015 season in the newly rebranded NASCAR Xfinity Series, RFR officials announced on Friday morning.

Sadler, a veteran of 435 Sprint Cup starts and three-time winner in NASCAR’s top series, returned to the Nationwide Series in 2011 with Kevin Harvick Inc., and spent the 2012 season at Richard Childress Racing before joining the Gibbs stable in 2013.

A two-time championship runner-up and 10-time race winner in the Nationwide Series, Sadler finished fourth in the 2013 standings and is currently fourth in this year’s points with three races remaining.

OneMain Financial has sponsored Sadler since his move to KHI in 2011, and was a sponsor of Roush Fenway’s Nationwide Series teams from 2008 to 2010.

“It is an honor to remain with OneMain Financial next year,” said Sadler, who will drive a No. 1 OneMain Financial-sponsored Ford Mustang. “Their commitment to teamwork and excellence carries throughout the organization and extends to the racing program. I’m thrilled for the opportunity to race under the OneMain Financial banner and team up with Roush Fenway Racing to compete for the NASCAR Xfinity Series championship in 2015.”

The 2015 season will mark OneMain Financial’s 12th season in NASCAR, and the company’s return to a full-season sponsorship, serving as primary sponsor for all 33 races for the No. 1 Ford Mustang in the Xfinity Series.

“It’s great to have OneMain Financial back on board,” said Roush Fenway president Steve Newmark. “They are a first-class organization from top to bottom, a leader in their field and one of the most respected organizations in their industry. We enjoyed a great partnership in the past, and we look forward to reigniting that relationship moving forward next season.

“We are also very excited about what Elliott Sadler brings to our driver lineup,” added Newmark. “He is a seasoned veteran and a winner on the track. He brings a reputation as a fierce competitor, and I know that our entire organization, and particularly his Roush Fenway teammates in the NASCAR Xfinity Series — Chris Buescher and Ryan Reed — will benefit from his experience next season.”(foxsports.com)

It is going to be interesting to see if Sadler can pick up his game with RFR.  When he downgraded to the Nationwide Series from Sprint Cup, it was widely expected that Sadler would be a favorite to win the championship.   So far that dream or expectation has not been materialized , no matter who he was driving for, KHI, RCR, or JGR, over the last four years!  In light of RFR losing Carl Edwards next year, this looks like at attempt at that organization to gather a grizzly veteran to try to shore up their NNS program, next year relabeled the NASCAR Xfinity Series!