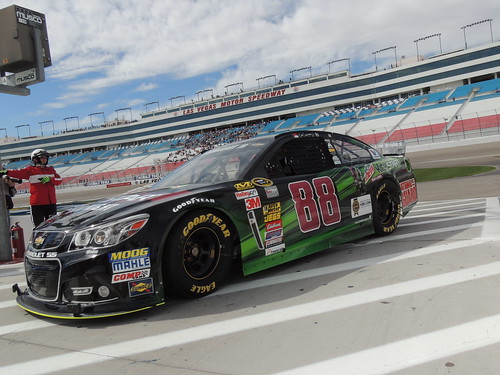 Dale Earnhardt Jr. won’t win his first Sprint Cup championship this season, however he will head into the off season with at least four race victories for this year!  Just when some fans had written Junior off, he emerges from the burning embers like the Phoenix!

Earnhardt, who was bumped from the Chase last week when he failed to advance to the Eliminator Round of the series playoffs, held off Hendrick Motorsports teammate Jeff Gordon to win Sunday’s race at Martinsville Speedway.

The fourth win of the year gave Earnhardt his most victories since 2004 when he won six times while driving for Dale Earnhardt Inc. Most importantly, it gave him a win at the historic Martinsville short track.

“Oh, man, been trying to win here for so many years,” Earnhardt said. “Real emotional win. I can’t believe we won here.

“We’re going to drink a lot of beer tonight.”

The race was a typical Martinsville race with tempers flaring and some paybacks erupting!  The most obvious was the tit-for-tat between Brian Vickers and Kasey Kahne.  those events were three of the many yellow flags that were waved in the race!

With 65 laps to go in the 500-lap race, Brad Keselowski, took a big hit in points as he broke a rear end gear.

With 47 laps to go, Earnhardt put the bumper to Clint Bowyer and took the lead. Gordon moved past Bowyer into second place with 33 laps to go. But once around Bowyer, Gordon was 1.5 seconds behind leader Earnhardt as the laps were winding down.

Earnhardt ran into heavy traffic with 20 laps to go but was able to thread his way through. He appeared headed to victory when a crash with 12 laps to go brought out the red flag.

Earnhardt and all but three others stopped for tires when the pits opened.

Taking the lead was Stewart, who did not stop.

When the race restarted with five to go, Earnhardt was fifth and Gordon eighth.

With four to go, Earnhardt blew past Stewart. Right behind was Gordon. At the white flag, Gordon was two car lengths back and closing. But coming out of the final turn Mr. Four-Time, Gordon, could not catch the eventual winner, Dale Earnhardt, Jr., who finally grabbed his first Ridgeway Grandfather clock!

Then Junior got emotional.

Adding to the intense emotion of the Martinsville moment were thoughts of the tragedy of a decade earlier, 2004, when an airplane carrying Hendrick family members and team members crashed en route to the race. All aboard were killed.

“I lost my daddy (seven-time Cup champion Dale Earnhardt Sr.) a long time ago, and I know how hard that is,” said Earnhardt, who was eliminated from the Chase a week earlier at Talladega. “I can’t imagine losing the magnitude of people that Rick lost. My heart goes out to him during this weekend.

“I love that his cars are good (enough) here to get the victory. So this honors them. I’m just real proud to be able to win at Martinsville in a Hendrick car. They always win here.”

I will conclude with something that may be somewhat familiar.  I will take some poetic justice and liberties from this Ernest Laurence Thayer poem of “Casey At The Bat”.

Oh, somewhere in this favored land the sun is shining bright,

The band is playing somewhere, and somewhere hearts are light;

But there is so much joy in Martinsville—the mighty JUNIOR has hit it out!

All is well in Junior Nation tonight!