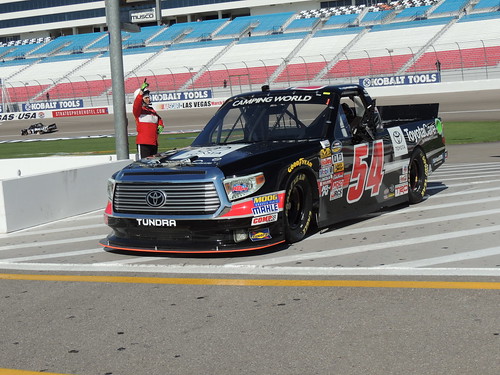 A year after picking up his first Camping World Truck Series victory at Martinsville Speedway, Darrell Wallace Jr. did it again!  Bubba led a race high of 97 laps in the Kroger 200, notwithstanding those 97 laps, he led the most important lap, the lap that led the Kroger 200 field on Saturday afternoon to the checkered flag for his third victory of the season.  Following Wallace to the finish line were fellow Toyota drivers Red Horse Racing’s Timothy Peters, series points leader Thor Motorsports driver, Matt Crafton, and Kyle Busch Motorsports driver Erik Jones.  Rounding out the top five was Brad Keselowski Racing and Team Penske development driver, Ryan Blaney.

For this race Bubba’s truck, the normally numbered #54 Kyle Motorsports Tundra, was renumbered and repainted to honor the #34 of of this year’s NASCAR Hall of Fame inductee, Wendell Scott.

As was the case two weeks ago in the Sprint Cup race at Charlotte, there was some extra curricular activity after the race.  This week it was Johnny Sauter providing some fireworks on pit road.  I am not sure but upon reading the lips of Johnny Sauter, I can confirm that Sauter was not asking Timothy Peters out for dinner and drinks after the race!

For my solution to the post race pit road and garage shenanigans, check out my very creative ideas that I have written about on another web site.

The title of the article is:

My Recommendation for Anger Management After the Checkered Flag Waves