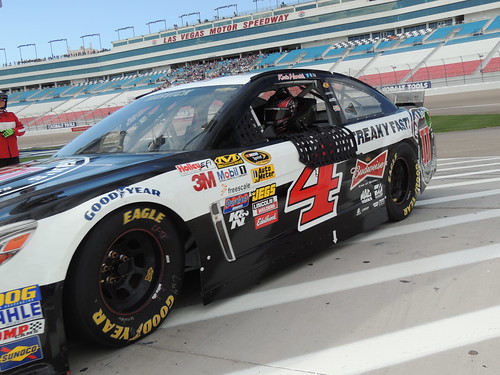 Kevin Harvick, who has led a lot of laps in a lot of races in 2014 but has had trouble closing the deal of late, won The Bank of America 500 race at Charlotte Motor Speedway on Saturday night.  It was the third victory of the season for Harvick, but the first since the early spring race at Darlington, approximately six months ago.

This victory punched the Stewart-Haas Racing driver’s ticket into the third round – The Eliminator Round – of the Chase playoffs, where he joins Team Penske’s Joey Logano, who won a week ago at Kansas Speedway.

“Everybody on our team has just continued to build better race cars and we know that we’ve had the cars to run up front and lead laps and do the things that we need to do,” Harvick said. “Things just haven’t gone right and we’ve made some mistakes; things haven’t gone right more than not.”

In Chase trouble as a result of poor finishes at Charlotte are Matt Kenseth, Brad Keselowski, Jimmie Johnson, and Dale Earnhardt Jr. as they find themselves in positions nine through twelve heading to Talladega for next weekend’s “elimination race”.

Meanwhile, Harvick led 162 laps of the 334 laps and survived a wild two-lap dash to the finish after the final caution.

He pulled away after a restart on Lap 333 of 334 and beat Jeff Gordon to the finish line by .572 seconds. In doing so, he earned himself the luxury of heading to Talladega with very minimal stress! As was the case in oh so many races this season, Harvick flat dominated the race. However, unlike so many of the races this season, this time Harvick was able to “close the deal” at Charlotte.  His team has been harnessed with so many mechanical failures this season that, if the tides could have been reversed, Harvick could have easily added another five victories to his total.

After the race, several skirmishes broke out on pit road and back near the haulers. At the center of all the incidents was “Blazingly Bad” Brad Keselowski, the Team Penske driver who was the 2012 Cup champion.

Keselowski clipped Hamlin’s rear bumper on the cool-down lap, trying to spin Hamlin out, then hit Kenseth’s Toyota with his Ford on pit road, and then careened into Tony Stewart’s car.  Stewart’s car was “collateral damage”!

Asked what started all the trouble, Hamlin said: Keselowski.

More about the “Saturday Night Fights” on my next post!

Check out The Chase standings after Charlotte.