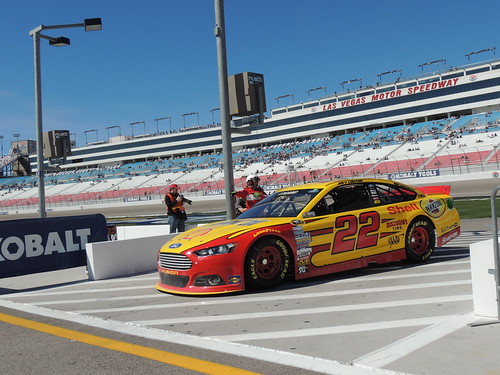 Joey Logano capitalized, first, on a very fast car, and, second, on big trouble by others with fast cars Sunday at Kansas Speedway to win the Hollywood Casino 400 Sprint Cup race.

The victory, by Logano, was the fifth for this season, but more importantly it guaranteed the #22 a spot in the next round!

Asked what the victory meant to him, Logano said, “It makes Talladega (the dreaded x-factor race two weeks) a lot easier, that is for sure. To know we are onto the next round we can focus on a few more races coming up and we will keep trying to capitalize like we are doing.”

To get the victory, Logano had to hold off rookie “Yong Money”, Kyle Larson, who finished second, and who kept applying the pressure after the final restart of the race, which came with 28 laps to go.

“I took off tight and it was kind of a cat and mouse game,” Logano said. “He was a little faster at certain points in the run and I was faster late in the run and toward the end he was hitting his stride. I had to take his air away. I was running that top and that was also the lane for him which is what held him up from getting to us. I worked the traffic perfectly and didn’t lose momentum to give up the lead.”

But it was trouble suffered by fellow Chase drivers like Kevin Harvick, Dale Earnhardt Jr., Jimmie Johnson, Matt Kenseth, Kasey Kahne, and teammate Brad Keselowski that made Logano’s job just a wee bit easier.  Several of the above mentioned drivers had tire problems and some ended up trying to knock down the fences. Much to Logano’s delight!

“Yeah,” he said, “when I see other Chase guys having troubles, that’s when you say, holy cow, this is really about a solid finish here today you know how the race goes second, third, fourth, fifth-place finish would be great. It sets you up pretty good for getting to the next round. But you dangle a checkered flag in front of me, I’m going to go. We were able to have a fast enough car that I knew we could do it. I wasn’t going to put my car in a bad spot but I was going to be aggressive about it and try to put other people in a bad spot to make those passes. We were able to do that today.

“So you think about it, you see other cars that are having trouble, guys you know you are going to be racing for this championship with and it goes through your mind, but at the same time you’ve got to keep doing what we’ve been doing all year, and that’s been trying to win the race and not points racing, so we’ll keep trying to do that.”

The bottom four drivers in the standings after the Hollywood Casino 400 are Kasey Kahne, 25 points behind the points leader Logano, Brad Keselowski down 39 points, Dale Earnhardt,Jr. back 42 points, and in last place Jimmie Johnson back 44 points.  These four drivers are in jeopardy of being eliminated after Talladega, barring a victory at either Charlotte or Talladega!

Notwithstanding the fact that three of these four drivers, Johnson, Earnhardt, and Keselowski, have been in the top ten most all season long, absent a victory in either of the next two races, we could see these four drivers, some were heavily favored to be in The Chase at the onset of the this season, eliminated from The Chase!

And TNT thought that they knew drama…….