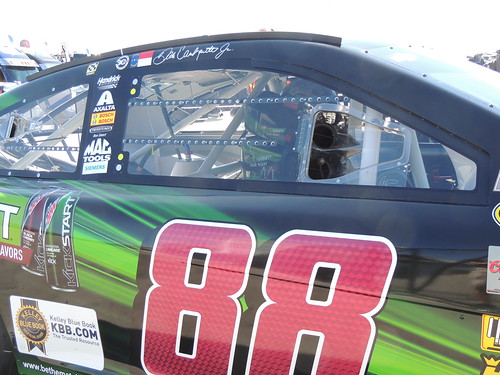 With the great respect and admiration that seems to grow with each year that Dale Earnhardt, Jr. is associated with Rick Hendrick and Hendrick Motorsports, it was just assumed. by just about everyone that is in the know, that Junior would end his racing career with that organization.  After all back in 2008, when he joined that organization, he did so with much hype, ballyhoo, and media fanfare!  Even though it has taken the HMS#88 team six years to really jell and perform at the level that the championship, it appears that the team, and driver, have begun to hit their stride in 2014.

So with those thoughts in mind, it really seemed as though Dale Jr. , as Jeff Gordon is doing, would be tenured at HMS as long as he wanted to be there.  And therefore, would drive #88 HMS Chevy until he wanted to step out of that seat and retire from racing!

After all, Earnhardt Jr. has repeatedly expressed his admiration and respect for team owner Rick Hendrick and the entire Hendrick organization, where he has thrived both personally and professionally over the past seven years.

That was, and has been, the prevailing wisdom in the NASCAR garage area.

As surprising is it might sound, though, Earnhardt Jr. apparently doesn’t plan on Hendrick Motorsports being the last team for which he straps on a helmet and jumps in a NASCAR stock car. No, it seems that NASCAR’s most popular driver actually intends for his last ride to come with JR Motorsports — the company he started in 2006 and that fields two full-time Nationwide Series teams and one part-time Nationwide team but no Sprint Cup teams.

“I would like to race for that company one day, so I hope to keep it healthy until that opportunity presents itself — whenever I’m done Cup racing — to jump in a Nationwide car and do that for a couple of years in my own shop,” Junior said on Friday at Kansas Speedway.

In other words, the third-generation driver plans to finish his NASCAR national series career right where he began it — in the sport’s No. 2 division, where he won back-to-back championships in 1998 and 1999 before making the jump to Sprint Cup in 2000.

So when will the soon-to-be-forty-year-old hang up his helmet?  That is anybody’s guess.  However, Junior did reveal this week that he wouldn’t mind racing another ten years!