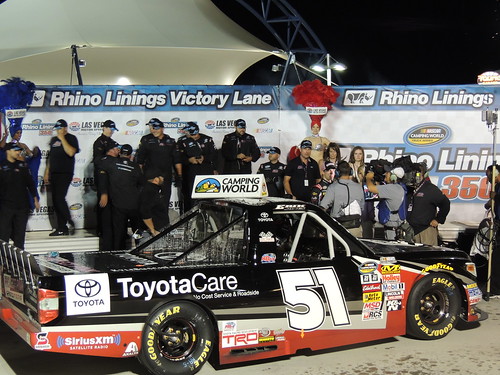 In the land of big rollers, big spenders, playing the odds, and playing high stakes poker, Erik Jones, who is not even old enough to place a bet in a casino, showed the crowd at the track, and on TV, that he is an odds on favorite to win any race that he is involved in as a driver.

Saturday night Jones was not the dominate truck, nor did he lead the most laps, however, he did lead the most important lap!  That lap was the the one that pays all the big money, the last lap!

Jones, 18, made a late-race pass on his Kyle Busch Motorsports teammate Darrell Wallace Jr. with 13 laps to go, earning his second victory in nine starts this season.

“It was a blast,” said Jones, who recovered from an early race hiccup on pit road to win in his debut at Las Vegas. “I learned a ton. To get a win on a mile-and-a-half that’s awesome. It drove so good at the end, I couldn’t ask for any more than this. I wanted to win out here so bad, I had this marked down as one I was looking forward to. This is really surreal for me right now.”

Jones, who notched KBM’s 10th NCWTS win of 2014 credited crew chief Eric Phillips with the right adjustments on the final stop that earned him his third-career victory in 14 NCWTS starts.

“It was perfect,” he added. “We were way, way too loose in traffic before it, but we had a strong Tundra. It was a perfect adjustment. We made a big swing at it, it just worked out.”For Wallace Jr., after a dominant performance, took the defeat as a huge bust!

“Just got beat, flat out,” said Wallace Jr., after recording his fifth runner-up performance of the season. “Congrats to the 51 (Jones), hate that it’s not the 54. We need a win. (It’s) frustrating, I hate finishing second so bad. Thanks to my guys though. I thought it was ours. Another KBM dominance for sure. We’ll go onto Talladega and try to finish one spot better.”

This young man, Erik Jones, is compiling a very good resume in the Truck Series, two wins in nine races.

After watching Jones win the Truck race at Phoenix last year, and then again last night at LVMS, it has become very apparent to me that Joe Gibbs Racing has a very good developmental driver, with huge potential, nicely tucked in their stable.

Last night, after a team qualifying blunder, Jones very methodically plodded his way through the field, making some very veteran passes, stalked the leader, his team mate, Darrell Wallace, Jr. to overtake him with 13 laps to go, and secure the win.