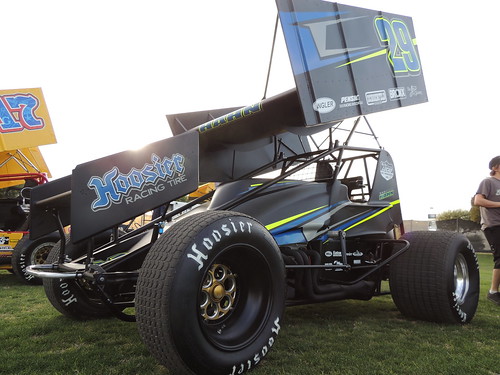 Carson Macedo drove by Daryn Pittman on the outside of Turn two on lap number eight, and hung on to win his first career World of Outlaw feature during the 61st Gold Cup Race of Champions.

“I wanted to do donuts so bad, but got warned to go to the scales. Im just so excited.” Stated a jubilant Macedo in Victory Lane. The win marks Tarlton & Sons Racing’s second straight World of Outlaw win at the Silver Dollar Speedway. Jason Meyers piloted a Tarlton Racing car to the win during last years Gold Cup.

Daryn Pittman led the field down to the green flag and would pace the field for the first eight laps of the event. That was until Macedo drove it deep, gassed it up, then motored right around Pittman down the back straightaway on lap eight. Pittman would try to out-duel Macedo on each of the subsequent restarts, but just never could quite make that happen. Pittman, the defending 2013 World of Outlaw champion, would finish in the second position. The 2009 Silver Dollar Speedway track champion, Bobby McMahan, was able to work his way up to a very strong third place finish. Steve Kinser had a good night, as well, piloting his Tony Stewart Racing, Bad Boy Buggies #11 to a fourth place finish. While Chico, CA’s Kyle Hirst rounded out the top five.

Heat race action saw California natives, Colby Copeland, Bobby McMahan, and Kyle Hirst all pick up heat wins. Steve Kinser won his heat race and was the only Outlaw driver to do so.

In the C-Main Joey Saldana and DJ Netto were able to transfer to the B. Netto drove around Jason Sides late in the race to secure his transfer spot.

In the B Main, Rico Abreu slid past Willie Croft in turn one on the final lap to capture the B-Main Event win. Croft would finish second, with Donny Schatz finishing third, and Andy Gregg taking the final transfer spot into the A Main event. Joey Saldana finished fifth in the B Main but utilized a provisional to start 25th in the A Main.

Daryn Pittman won the Dash, as well as set fast time with a blistering lap of 11.788 seconds.

It was refreshing to see this young Fresno area racer dominate, and beat, the veteran drivers that tour throughout the USA with The World of Outlaws!