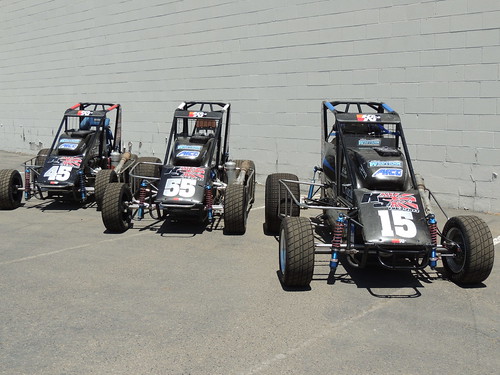 Brian Gard drove a near perfect race in the midget feature Thursday night to pick up the victory during the 61st Anniversary Gold Cup presented by Chuck Patterson Ram Trucks. “We built a brand new car midseason and it finally all came together for us,” stated a very excited Gard in victory lane.

Trey Marcham jumped out to the early lead, as the green flag waved, and would lead until lap 14.  That was when Gard would make his move around Marcham. Brian would then pull away to win the race in a dominating fashion.

Marcham was able to hang on to finish a very convincing second. “Sugar” Shane Golobic drove a great race, finishing in the third position. Richard Vanderweerd and Geoff Ensign rounded out the top five. Ensign drove from near the back of the pack, 21st place, to finish in the fifth position and was the Hard Charger for the Midget Division.

Ronnie Gardner, Brian Gard, and Alex Schutte were all victorious in their respective heat races.

Gardner set fast time with a 14.047 lap time during qualifications.

Rossi Gets Collected At Texas

Hinch Rebounds In the XPEL 375