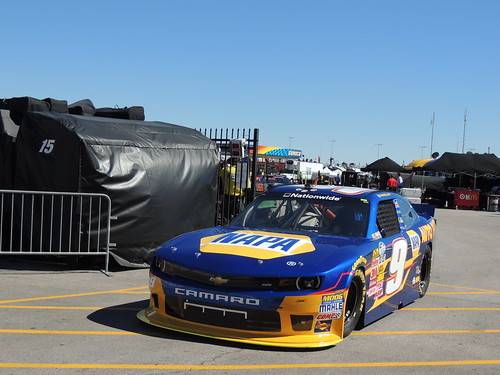 NASCAR’S number two series will have a new title sponsor beginning in 2015!

The following is the press release from the NASCAR/XFINTY press conference:

The 10-year agreement officially begins Jan. 1, and will see the series renamed the XFINITY Series. XFINITY becomes only the third title sponsor in the program’s history, following Anheuser-Busch (1982-2007) and Nationwide (’08-14).

“We’re absolutely delighted to have an innovative technology company join us like XFINITY brand with Comcast,” Brent Dewar, NASCAR Chief Operating Officer, said. “Through the Industry Action Plan, we have been very progressive in introducing innovation and technology to our sport. And we think this is a perfect marriage and partnership to help us over the next 10 years truly grow the XFINITY Series in the way that we have designed and are strategizing to do that. It’s pretty exciting for both parties.”

XFINITY is the cable and broadband division of Comcast, providing video, high-speed Internet and phone service to residential customers. Comcast also owns NBC and NBC Sports Network, which will broadcast the final 20 NASCAR Sprint Cup Series events next season as well as the final 19 races of what will now be the XFINITY Series. The ability to align itself with such a recognized, technologically driven company was a huge plus, Dewar said.

“It’s a great fit. … We’re looking for great innovative companies, whether they are innovating like our great automotive partners or our auto supply companies that work with us, or packaged goods,” he said. “It’s about innovation, and that’s what we’re looking at. We’ve got a great successful product, but we’re not resting on our laurels to say everything is just perfect. We want to continue to innovate; we want to grow with our fan base. We want to bring our fan base with us.” Dave Watson, Executive Vice President and COO for Comcast Cable noted that, “Technology lives at the heart of NASCAR, just as it does for XFINITY. “NASCAR provides an exciting environment in which to showcase our video and Internet products and we look forward to further enhancing the fan experience at home, at the track and on the go for years to come.”

The series has long been the training ground for up-and-coming stars in the sport, and Dewar said the relationship with XFINITY should only help strengthen that commitment. At the same time, he said, it will help the series remain relevant in what is trending toward a much younger fan base and younger competitors. “Look at the theme we have in the XFINITY Series — ‘where names are made,’ ” he said. “These young, talented drivers we’ve been building through our NASCAR Next program and our Drive For Diversity program, many of those drivers are now growing into the XFINITY Series. “You think about the ability to connect with millennials and to be contextually relevant, that’s what it’s all about. That’s exciting to them, and it’s equally exciting to us to be able to amplify that message to our great fan base.”

Nationwide officials announced late in 2013 that they would not return to sponsor the series beyond this season, however the company will remain involved in the sport. In addition to being the official auto, home, life and business insurance of NASCAR and presenting sponsor of the Betty Jane France Humanitarian Award, Nationwide will sponsor Sprint Cup Series driver Dale Earnhardt for 12 races beginning in 2015 and 13 races for the following two seasons.

“Our relationship is not coming to an end,” Dewar said. ” It’s continuing to evolve. They’ve been a fantastic contributor to NASCAR, and we couldn’t thank them enough for what they’ve done in their entitlement sponsorship of the series. But like all marketing decision and brands … they’re evolving to their next phase that aligns up to their marketing strategy as an official sponsor and also moving into the team part.

“So as part of the ecosystem of the sport, we’re delighted with that. We’re glad they feel strongly about the Nationwide Series and equally proud that they see the value in NASCAR and want to continue to invest in the sport. That’s a win-win-win (situation) for all of us.”(nascar.com)

Is going to be hard trying to get used to the new series name, Xfinity Series!  But there have bigger adjustments that have occurred over the past few years, and survival was not jeopardized!