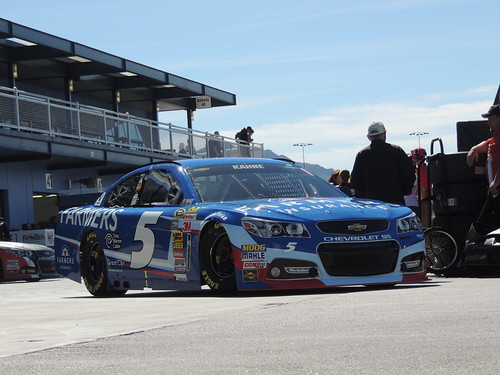 Kasey Kahne, with an assist from Kyle Busch and Paul Menard, won Saturday night’s Sprint Cup Series race at Atlanta Motor Speedway, and locked himself into the upcoming Chase playoff.

The victory was Kahne’s first of the season, and came with just two races to go before the start of the Chase.

“Yeah, man, it took a lot,” Kahne said. “We were all over the place during the race but the guys stayed with me and worked hard. On those restarts – I didn’t know what would happen because I had great restarts all night and I struggle with restarts a lot. That’s big, because that is one of the things you have to be good at and it worked really well tonight.”

The win was secured by a couple of late-race altercations in involving other drivers.

The first occurred when Kyle Busch slammed Martin Truex Jr. from behind with two laps to go, and Kevin Harvick running a distant second to Kahne.

The wreck cost Kahne his shot at an easy win and Truex wondering what was going on in Busch’s head.

Matt Kenseth stayed out during the ensuing caution and restarted on the pole for the green, white, checkered restart.

Shortly after the restart, Menard forced Kevin Harvick, who had dominated the race by leading 195 laps, into the wall, and brought out forced a second green-white-checkered restart.

“You can’t control all the circumstances out there like tonight,” Harvick said. “It’s just unfortunate for everyone on our Jimmy John’s Chevy that everything went the way that it did, but what do you do? Everyone was on the gas at that point, and that’s kind of the nature of the beast, I guess. We had a hard time getting off pit road tonight ahead of the 11 (Hamlin) and the 20 (Kenseth). Those guys have been really good all year, and that’s one area we just need to fix some things.”

On that restart, Kahne, who restarted on the outside, front row, stayed with Kenseth through the first several turns.

Kenseth wiggled on the final lap when running along side of Kahne, and that sealed the deal for Kahne!

Kenseth finished second and secured a Chase berth based on points.

“I’d like to consistently have wins, that’s what I’d like to have,” Kenseth said when asked about being in the Chase. “The team has really been performing at a high level all year, really. I know when you look at the record books we have some crashes and some bad finishes and we don’t have a win yet, but I feel like our pit stops have been more consistent and faster than they were last year. I think our team has a lot of confidence, knock on wood, we haven’t had any kind of mechanical failures. I feel like the team is really ready, we just need a little more speed. I feel like we’re doing everything we can, we just need a little bit more to get over that hump and be standing over there in victory lane.”

With just one more race before the official start of The Chase, who will be added to the winner’s list, and thereby guarantee their race team a coveted spot in The Chase?

Check out the unofficial results from the Oral-B 500.