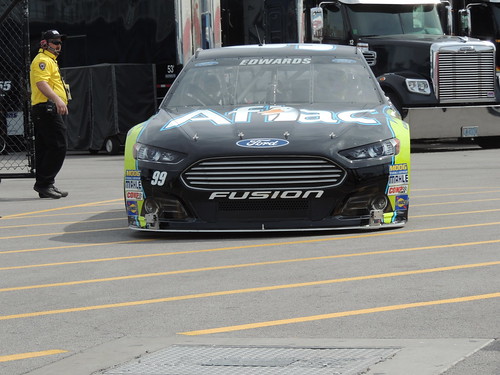 Now that the worst kept 2015 secret is officially a done deal, everyone, Carl Edwards, Roush-Fenway Racing, and Joe Gibbs Racing can get on with the season.

For Edwards, it means a better long-term future and a better shot at winning Sprint Cup championships. Although it won’t be easy. It’s not like JGR has been cranking them out, by any stretch of the imagination; the company’s last of three came in 2005 when Tony Stewart was behind the wheel of the #20 Home Depot Chevrolet.

Since the JGR switch in manufacturers from Chevy to Toyota beginning in the 2008 season, Denny Hamlin finished second in the Chase for the Sprint Cup in 2010, and Matt Kenseth did the same last year during his first season driving for JGR after also departing Roush Fenway. But there have been zero championships.

The addition not only of Edwards, but also of a fourth car and all the benefits expected to come with it, should help JGR break through on the championship front sooner rather than later, even though we’re talking 2015 and beyond. This year, it appears to have been behind Hendrick Motorsports’ Chevys and Team Penske‘s Fords from the start, with little evidence that it’ll catch up.

There is no doubt that TRD will be correcting the horse power issues, according to David Wilson, president and general manager of TRD, U.S.A., Toyota’s racing division.

In the press conference on Tuesday Edwards acknowledged that it was time for him to have a fresh start.  That is exactly what is going to happen in 2015.

With JGR starting a fourth team, and having Edwards strapped in the driver’s seat, JGR will now have data every weekend from a fourth car to share with the rest of its teams. With the performance, and number of cars, falling off this year at Michael Waltrip Racing, which runs Toyotas and shares limited technical data with JGR, this is a counter-move to combat Hendrick Motorsports’ current dominance.

Not only does HMS run four competitive championship caliber teams that share data and shop secrets, but it also has a close technical alliance with the four teams at Stewart-Haas Racing. That arguably gives them a huge competitive advantage, eight race teams.  With formation of the new fourth race team, JGR hopes to close that advantage/disadvantage with the signing of a big-name driver like Edwards, who should help them make their fourth car competitive immediately.

For the last several years, Joe Gibbs and J.D. Gibbs frequently were asked if, and when, they planned to start a fourth team. They always deflected the question by saying they would consider it when the time was right.  It appears that all the stars and planets have lined up!  Therefore, it would appear that currently the time is right!

The organization that must be watching all this with a jaundiced eye cast toward the future is Team Penske. This season, the two-car operation is working well for Penske with Joey Logano and Brad Keselowski, two of the best young drivers in the sport, piloting its Fords.  But for how long can this two car operation keep up with the four car teams of HMS and now JGR?

Team Penske is only loosely aligned now with the other supposed Ford stalwart, which is Roush Fenway Racing. But the loss of Edwards is simply another huge blow that seems to have knocked RFR further down the road of irrelevancy in the Sprint Cup Series!

Next year’s RFR driver lineup of Greg Biffle, Ricky Stenhouse Jr. and Trevor Bayne scares absolutely no one in the NASCAR garage! If Jack Roush looks in the mirror, and is totally honest with himself, that truth would smack him squarely in the face.. Then he would be rightfully frightened for the future of his organization that looks so bleak!

Similarly speaking, how can Team Penske look to keep the heat on the mega-teams from Hendrick and JGR going forward, if it gets less help from an already anemic Roush Fenway Racing?  Look for the pressure to mount on Team Penske to add at least one more race team in the very near future.

Look for the addition of Carl Edwards to Joe Gibbs Racing to really fortify, and strengthen, that organization in 2015.