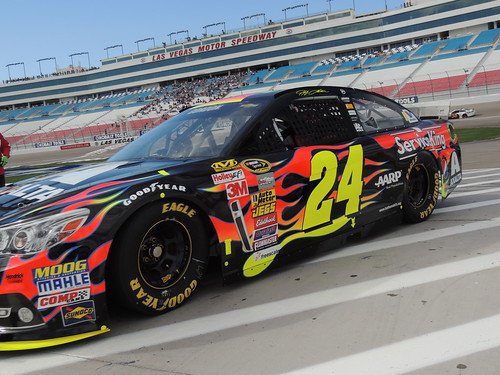 It appears that Jeff Gordon has done exactly what he said that he needed to do back in January during the annual pre season media tour of the race shops!  During some of the questions and answer sessions Gordon told the press that he really needed to work on getting better at restarts in order to have a chance at winning races in 2014.

With just 17 laps remaining at Michigan International Speedway, in the Pure Michigan 400, just like the Brickyard 400 three weeks ago, Gordon performed, what could have been an instant replay from that race, a perfect restart.  As the green flag waived, “Mr. Four-Time” gassed it up, let the big dog eat, and took the lead from Joey Logano as the two exited out of turn two.

The perfect restart along did not seal the win, however. Gordon had to hold off Joey Logano a lap later as the two went side-by-side up the back stretch.  But by the end of that lap Jeff Gordon had started to gap Logano ever so slightly, all the way to Victory Lane.

This is Jeff Gordon’s third win this season, and his 91st career Sprint Cup victory.

It appears that the Hendrick Motorsports #24 Chevy is really hitting on all eight cylinders just at the right time of the season.  It really looks like this team has a very legitimate shot at a fifth Sprint Cup title this year.

For the last four or five years Gordon, and his team, just did not have the appearance of a truly championship caliber race team. Their performance was highly erratic and lacked intensity.  However, that is not the case over the last two months.  The race team seems to be extremely focused, with their eye on the big prize, the Sprint Cup championship.

With just three races left in “the regular” season, it is “crunch time” for a few teams that have desires and dreams on making The Chase. Another way of putting it is; it is time “to show ’em what your got”, “let the big dog eat”, “let the rough side drag”, in other words, it is time to go for broke in order to rack up that all important win to try to get qualified for entry into “the big show”, better known as The Chase!

Check out the unofficial results from the Pure Michigan 400.