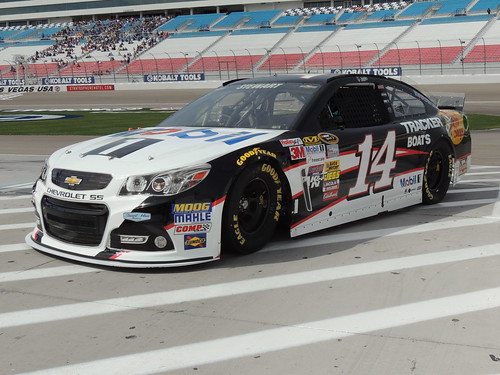 Let me first say that there are no words that can adequately express the grief that is being experienced after the tragic events Saturday night at a dirt track in Canandaigua, New York.

Likewise, a seemingly hard-boiled 43-year-old racer, and three-time NASCARSprint Cup champion, is beside himself, also appearing to wonder, along with the rest of hard core race fans, how this could have happened, and what comes next.

Still, there remains much to sort out, emotionally and perhaps legally, but to the question is where Tony Stewart goes from here? How will this affect both him and the Stewart-Haas Racing organization he co-owns with Gene Haas?  It may be that Stewart takes some time off away from racing.

Out of respect to Ward’s family, that might be the right thing to do.

“The decision to compete in this weekend’s NASCAR Sprint Cup Series event at Michigan will be Tony’s, and he will have as much time as he needs to make that decision,” Arning said in an email statement via Fox Sports. “It is still an emotional time for all involved, Tony included. He is grieving, and grief doesn’t have a timetable.”

Stewart also wisely cancelled a plan to race sprint cars this weekend, and Arning confirmed that Stewart will not resume any “extra-curricular racing plans … until further notice.”

There is no doubt that Tony Stewart will race again.  That is what racers do, even in the face of adversity! And let there be no doubt, Tony Stewart is a hard-charging racer.  However, now is way too early for him to climb back into a race car.  If he were to do that there would be a crush of media that would accompany him, and that would take away from what is truly important at this time.

It is my opinion that right now, this should be about Kevin Ward Jr. and the safety improvements to sprint car racing that the tragedy already appears to be bringing about. Perhaps spurred on all too often by the likes of Stewart and other big-time NASCAR stars who climb from their cars in an angered state, sprint car drivers frequently have been known to give in to racing rage, and place themselves in danger by scrambling from their wrecked vehicles to confront other drivers before safety crews can arrive.

It is quite unfortunate that it takes a fatality to bring about changes at any level of racing!  But the realities of life is that is usually what it takes to trigger changes!

Will Stewart ever be the same after all of this? The jury is still out on this subject. How could anyone be the same after being involved in such a horrific incident? But to guess exactly how it might change him as a driver or a person would be pure speculation.

Even he needs time to figure all of this out, and that would mean time away from the track.

There are many question that need answers.

Will Stewart eventually return to the hard-driving style that won him three titles in NASCAR‘s top series? Who knows, but the betting money is that he will be back racing in due time? He already was going through a difficult Sprint Cup season, attempting to come back from a severely broken right leg he suffered while racing sprint cars on dirt a year ago at Southern Iowa Speedway.

Additionally, what will the sponsors of his race team, as well as the three other teams at SHR make of all this bad press? The answer to this question is much more difficult to predict.  The answer will be predicated on how skillfully Stewart navigates the coming days, weeks and months.

If Stewart handles this in such a way that the sponsors deem wrong, or in any way insensitive, then the three time NASCAR champ could be considered radioactive, and thereby, SHR could lose millions in sponsorship dollars not only for the #14 car he drives, but also from the sponsors of cars driven by teammates Kevin Harvick, Danica Patrick, and Kurt Busch. The same could be true if criminal or civil charges are brought against him at some point.  However, the possibility of a criminal charge against Stewart remains unclear at this time.

All of the previously discussed items will determine any negative long-term effect that this may have on Stewart’s racing legacy. Notwithstanding that he has done many good things for the sport that should not be forgotten, especially at the grassroots level of dirt racing, every action has a consequence.

So the biggest question that is out there is, when will Stewart race next? The obvious answer, at this point in time, is that nobody knows exactly.  But it is my opinion that it should not be anytime too soon.

The important thing to remember in all of this is that 20-year-old Kevin Ward Jr. deserved a better fate, whether or not he was at fault for climbing from his wrecked car too quickly, and needlessly marching into harm’s way.

When the time is right, and this weekend at Michigan probably isn’t it the right time, Stewart will return.

Yes, when the time is right, he will climb back into his Sprint Cup car. But remember one very important thing, Tony Stewart must balance that decision in such a way as to make certain he is honoring the memory of young Kevin Ward Jr., and respecting the lengthy grieving process that Ward’s family is facing.

Maybe Stewart’s sponsors and/or those in Stewart’s inner circle will suggest that it would be in his best interest to take the rest of the year off. And maybe, if they were to do so, they would be right.

Only Tony Stewart knows how much time he will take off from racing before returning to the cockpit.