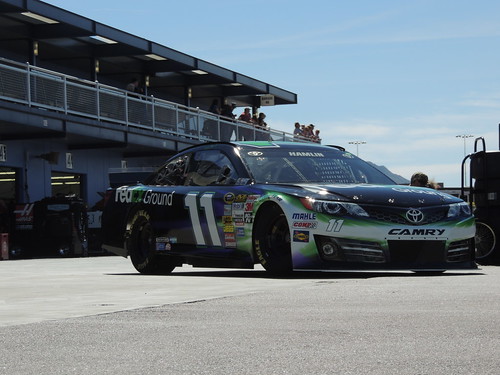 According to NASCAR the parts were confiscated and taken back to the research and development center in Concord, N.C. for further evaluation. According to one crew chief, If the block-off plates are not sealed off sufficiently, air can flow through the firewall enabling the car to gain anywhere from 20 to 30 pounds of rear downforce. Hamlin qualified 27th. After Hamlin pitted on Lap 55 from the lead, he fell to 13th but quickly made his way back to the front of the back to finish third on Sunday. He led 18 laps.

As a result of these violations, crew chief Darian Grubb has been fined $75,000 plus an additional $50,000 post-race fine for a total of $125,000. Grubb has also been suspended from NASCAR for the next six series championship events, plus any non-championship races or special events that might occur during that time period. Grubb will also be on NASCAR probation for the next six months.

With this latest gaffe by the JGR #11 team, this could possibly be the nail in the coffin that prevents this team from gaining access into The Chase.  Even though this team has a victory in the regular season, they cannot afford to slip, stumble, or or have one more mulligan in the remaining races prior to The Chase, because that would allow them to fall out of the top 30 in points!