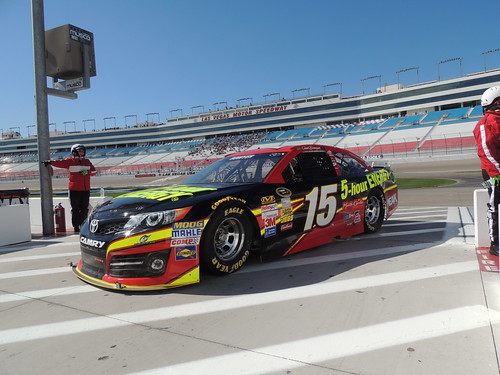 Rob Kaufman is a very successful businessman, reportedly made hundreds of millions controlling hedge funds.  Additionally, Kaufaman is co-owner of Michael Waltrip Racing. Now Kaufman has been put in charge of the newly created team owner Race Team Alliance, and is now the face of that organization.

NASCAR, it appears, is about to enter a new era in which the motorsports business will likely become more entrenched as the business of motorsports. Whether the new era will be malevolent or benevolent toward racing and its fans remains to be seen.

It was Kauffman’s MWR team that issued the original press release that announced the formation of Race Team Alliance on Monday. The release stated the nine largest NASCAR teams – teams that employ the biggest stars in the Sprint Cup Series – are members of the RTA.

It also announced the goal of the organization, which some are calling an owners union, is to include all teams.

In non-public forums, team owners have long discussed their satisfaction/dissatisfaction with their share of the multi-billion-dollar NASCAR pot. Especially that part of the pot where television revenues are located. Under the long-standing formula, team owners receive only 25 percent of the take while track operators get 65 percent, (that is Bruton Smith and the France Family, basically), and then NASCAR gets 10 percent (that is the France family, once again).

With the recession slowly winding down, and with sponsors trickling back into NASCAR, and with ownership costs at least holding steady, and with the pot sweetened by the arrival of NBC Sports and an increase in rights fees paid by FOX, owners apparently think now is the time to strike.

After being questioned extensively, Kauffman stressed that RTA is simply a “business association” that is more about cooperation – between the teams themselves and between the alliance and NASCAR – than competition.

“We just want to speak with a common voice,” Kauffman said. “We want to try to do some things for ourselves in order to get things done.”

He brought up the example of team travel.

“Every week we all go the same places. Wouldn’t it make sense consolidate things? To go to hotel chains and attempt to get a bulk rate?”

Kauffman said the goal of the RTA is to “collaborate” with NASCAR. The result, he said, could be positive for all involved. He cited the collaboration between teams, manufacturers and NASCAR on the Gen 6 project.

Given NASCAR’s long history of opposition to unions – and the fact that working class fans might note that the group is comprised of multi millionaires – it would certainly be wise not to call the group a union. Remember that Big Bill France SQUASHED in 1961, and again in 1969, the driver’s attempt at banning together in a union!

But it is highly possible that the RTA may function as a union, as it very probably will want a bigger say in financial and competitive issues in NASCAR!

NASCAR chairman and CEO Brian France is not his father or grandfather. He’s a 21st Century business man and won’t be standing at the garage gates telling RTA members “he has a pistol and knows how to use it”, as his grandfather, Big Bill France, told the drivers back in 1961.

But it is highly unlikely that Mr. France will hand over the keys to the castle to RTA! He won’t and he can’t as NASCAR and its track-owning/operation arm of International Speedway Corporation, have investors, stockholders and other “partners” to think of.

So far, NASCAR has not said much about the situation. It issued a one paragraph statement that said, basically, it is still studying the situation.

You can bet that Brian France has gathered up his key advisors, in both Daytona Beach and Charlotte, to try to digest, analyze, and come up with a plan to deal with this new entity called The Race Team Alliance!

There are two question, initially, that need to be answered:

1. How will the formation of RTA affect the sport of stock car racing in the coming months and years?

2. How will it affect fans?

To answer question #1, just remember what happened to Indy Car racing back in 1996 when Tony George and the race team owners collided!  It marked the downfall of open wheel racing!

As for question #2, the jury is still out.  So much depends on so many different variables that, at this point, can not be determined.

However, there are some certainties that have been uncovered by the announcement of the formation of the “alliance” among the top nine team owners.  The establishment of the RTA signals a dissatisfaction with the race team owners and the status quo.  The timing of this announcement just happens to coincide with a new, and more lucrative, TV deal with both FOX and new partner NBC!

If the owners of the series (NASCAR) and the race teams (RTA) go to war any time soon, it will be a fight between folks whom all have enormous bank accounts already.

Conversely, and as is almost always the case, the people most affected by this potential conflict would be the people with the little bank accounts, the race fans!

Sports fans, buckle up, this could be a very bumpy ride!