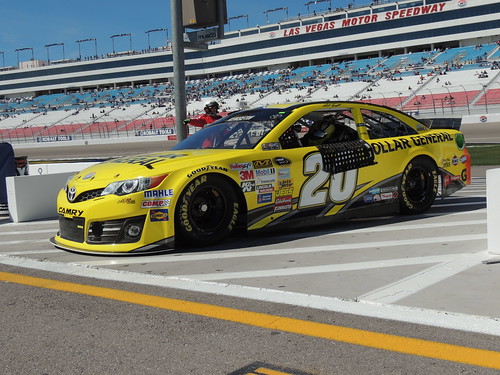 Twelve NASCAR Sprint Cup teams, including those of Matt Kenseth and Carl Edwards, will be penalized 15 minutes of practice time Friday at Texas Motor Speedway.  The penalties are for being late to qualifying inspection line last weekend at Martinsville Speedway.

This week, at Texas Motor Speedway, the Sprint Cup teams have 1 hour, 50 minutes of practice Friday, beginning at 6 p.m. ET.  However, the above mentioned race teams will only get 1:35 of practice time because of their tardiness at Martinsville!  So for all those who think that their employer runs a tight ship in the work place, it appears that NASCA, too, runs an equally tight ship when it comes to putting on a show at the race tracks.

The clock on these 15-minute penalties begin when the cars are ready for practice.

A note to self: Don’t turn on the TV late for practice today, NASCAR could penalize me and blackout the first 15 minutes of the race Sunday!

Briscoe Covers The Field At Vegas