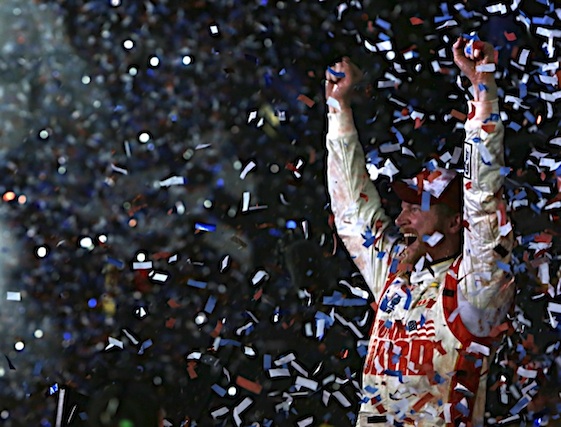 Over the past several years, the Daytona 500 had truly become “NASCAR’s Super Bowl”. That is, it has been more about the pomp than the circumstance.

However, not so this year. While Sunday’s 500 appeared to be well on its way to passing into the collective memory as The Rain Delay Race, it produced something that purpose-built novelty-act  sideshows had failed to produce in recent years –  a Monday morning talker for all the correct reasons.

The 2014 Daytona 500 was a good race, with a result that was sopping wet with pure honest emotion. The aftermath was so raw and so upbeat that the 6-hour, 22-minute weather delay that severed the action not only did not sour the day, but  grossly enhanced it.

The centerpiece of it all, of course, was Dale Earnhardt Jr. returning to Daytona International Speedway’s Victory Lane 10 years after winning his first 500 in 2004.

NASCAR, which in recent years has given off the impression that it was searching in vain for things to add pop to its product.  Sunday, however, NASCAR found what it has been looking for right in its own storage bin. The driver who is both a little bit country and a little bit rock and roll all at the same time made the high cost of attending races in the 2000’s feel like a bargain!The majority of those who remained in the stands were rooting jubilantly for #88 as he came roaring out of turn four looking at the white flag.

I can tell you one thing that is for sure, the crowd at DIS (Daytona International Speedway)– Junior Nation’s ‘hood – really loved the outcome of the race!

But it was a fellow driver, and not a driver who was a teammate or a fellow Chevrolet driver, but a driver whom Earnhardt Jr. had just deprived of his first 500 victory, who put Junior’s/NASCAR’s day in perspective.

“I thought he did a great job,” Ford driver and race spokesman from the margin Brad Keselowski said of Earnhardt. “If there is ever a guy who is due, it is a guy that has finished second three of the last four years.

“He (Dale Jr.) runs restrictor plates as an elite driver and is probably in the top-three. He hasn’t got the win when he probably deserved it a couple times due to a whole bunch of circumstances out of his control. He was due, and today was his day. I am happy for him and happy for all those guys. There are a lot of great people over there on that team.. It is good for them. I am happy for him,” continues Keselowski.

As happy as Earnhardt’s fans were for him, Sunday night, he was just as happy for them. Earnhardt was sincerely happy for all of his fans!

Trust me on this one, sports fans, Dale Jr. has been very sensitive to the disappointment he has inflicted upon his followers, Junior Nation, in the years since his move to Hendrick.

After winning yesterday, he spent as much time talking about fans as they will spend talking about him today. And the tone of his talk about fans was anything but of the “Ah, the little people” variety.

“When you’re close enough to the front to win races, there’s a lot on the line, it’s a big race, and you want to win it so badly, your team wants to win it so badly,” Earnhardt said. “You realize at that moment, especially inside of 20 laps to go, you’re in the top five, you realize at that moment there’s countless people watching on television, there’s countless sitting in the grandstands with your shirts and hats on, your team over on pit wall, your crew chief, your family back home watching. There’s so many people pulling for you that want to see you win, it’s a heavy weight.

“You get so caught up in trying to do what you can to make that happen. When you finish second or you fall short, it’s really disappointing. You’re proud of that effort inside somewhere, but outwardly you’re disappointed because winning’s all that matters when it comes to Daytona. They won’t really remember you for running second a lot.”

“It’s a weight when you’re not able to deliver. When people say you’re the face of the sport, you’re running fifth or 10th every week, it’s very challenging because you want to deliver and you’re not delivering.

“This brings me a lot of joy. I look forward to going and doing all the media all week long and representing the sport.  “I don’t know that I realize how big a deal it is, but I know I got a lot of fans that are really happy, really enjoyed what we did tonight. Can’t wait to go to work tomorrow to brag to all their buddies around the water cooler. Monday is going to be a fun day for a lot of people in Junior Nation.”

Check out the unofficial results from the 2014 Daytona 500.