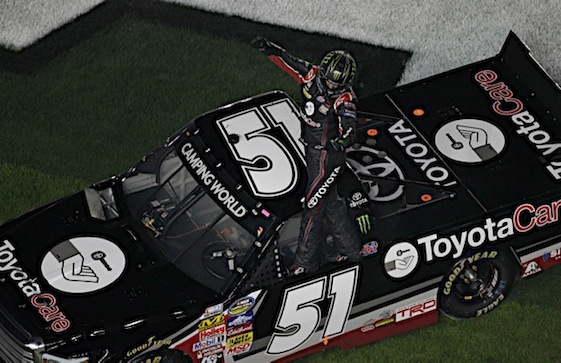 It was an old fashion drag race from turn #4 to the start/finish line in the tri-oval Friday night at Daytona International Speedway.  As the checkered flag flew, it was Kyle Busch who clipped Timothy Peters by a scant .016 of a second to collect the hardware!

With this win, Busch becomes the first driver to win in four different series at the “World Center of Racing”. His win also extends Toyota’s dominance in the 100-lap, 250-mile race, giving them their eighth-straight victory.

Busch, who led four times for 25 laps, was in second place on the last lap, the spot where he exactly wanted to be. Exiting Turn 4, Busch made a run at Peters on the outside lane and they drag raced to the checkered flag for a photo finish.

“I didn’t know that I had enough to get it done,” Busch said. “Timothy (Peters) was really fast — he could make that outside lane go. He got up to the lead there and then pulled down in front of me and the outside was still trying to get going with the 32 (Ryan Truex), but Timothy was so fast leading the top that he could get to the lead and then he was so fast leading the bottom that he could pretty much keep those guys at bay behind us.

“Coming out of (Turn) 4 I just thought, ‘Hey, I’m by myself and the 98 (Johnny Sauter) is far enough back and I think if my truck is faster than his truck then I think I can suck up on him a little bit, pull out and then see if I couldn’t get alongside of him enough to pull him back with the side draft.’ Kind of do like an old school sling shot. It didn’t really look like one, it just kind of looked like a slow motion sling shot at real speed, but it happened and got alongside of him and drug him back — and then him and the 98 had to get nose-to-tail and we already had the momentum.”

As is always the case with this Camping World Truck race at Daytona, the last few laps cranked up the noise and the heat!  This race is, without a doubt, the best bang for the buck for the NASCAR fan!