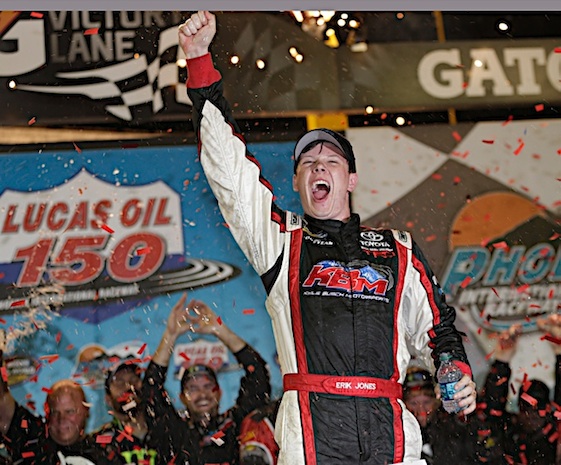 The 17-year-old Jones took the lead on Lap 142 of 150, short-cutting to the inside of Chastain through the dogleg on the backstretch.

Jones eclipsed Chase Elliott, a winner earlier this year at Canadian Tire Motorsport Park, as the youngest winner in the truck series.

Matt Crafton moved closer to the series championship by finishing fifth. He will be 46 points ahead of Ty Dillon, who finished fourth, when the series arrives at Homestead-Miami Speedway for next weekend’s season-ending race.

Crafton only to start Friday’s race at Homestead-Miami Speedway to become 2013 champion.

Jones lost the lead to Chastain during pit stops under caution on Lap 89, the yellow flag necessitated by Ron Hornaday’s hard crash into the Turn 4 wall. After his release from the infield care center following the wreck that ended his race, Hornaday revealed that he had been released from his ride in the No. 9 NTS Motorsports truck and will drive for Turner Scott Motorsports in the season finale.

As soon as the green flag waved, however, Jones powered to the outside of Chastain after a restart on Lap 94 and cleared the No. 19 by the time the trucks exited Turn 2.

Jones opened a lead of 3.2 seconds before debris from Joey Coulter’s truck caused the fourth caution of the night on Lap 110. Chastain grabbed the lead from the inside lane after the Lap 120 restart moments before John Wes Townley’s spin into the outside wall caused the sixth caution.

From my seat high in The Allison Tower, the Friday night race was very exciting.  The two teenagers of Erick Jones and Ross Chastain were the class of the field all night.  Could the reason  for their dominance be, as ol DW would say, “they don’t know what they don’t know”?  Or was it that they just had big horsepower and  great handling trucks?

It looks one of my Tulare, CA home boys, Matt Crafton, will take his very first NASCAR Camping World Truck championship trophy home this year.  Crafton is one of the longtime veterans of this series, and it is very fitting that this driver climbs to the top of the heap in this series this year!  He was a very consistent finisher all season long!