Fear is a part of life.  You either run with it, or you run from it!

Talladega has been defined in may ways.  It is defined as the largest, longest race track on the NASCAR circuit.  It has also been described as the wild card race,  an alley fight on four wheels, and the facility physically rests at the intersection of Mayhem and Courage!

The race today did not lack any excitement, however, it did lack “the big one” notoriously associated with restrictor plate racing.  Nevertheless, the tension was high as the laps were winding down with Jamie McMurray leading and Deal Earnhardt, Jr. on his bumper.

The victory came under yellow and was the Earnhardt Ganassi Racing driver’s first win since 2010. It was his second win at Talladega and seventh of his career.

Dale Earnhardt Jr. finished second, having been denied a shot at the win by a wreck which occurred on the final lap.

” I don’t know how the last lap would have played out,” McMurray said, “because I could see the 88 trying to set me up and trying to figure out where he could get a run on me but when I saw the caution come out behind me. Honestly, I wanted to see it end under green but at the same time, I said if there was a caution I would be OK with that right now too.”

Recapping the last few laps it went like this:

Earnhardt Jr. had the lead when the cars began pitting under green for the last time with 28 laps to go. When that series of stops cycled through about five laps later, Kyle Busch had the lead.

The Joe Gibbs Racing driver stayed up front for nine laps before giving the lead up to McMurray.

With 15 laps to go, the giant packs of tightly bunched cars began to form.

With 10 laps to go, McMurry still had the lead with Earnhardt Jr. right on his rear bumper. They sat at the head of a long line of cars which was riding the high line on the track in the corners. With eight to go, the field was one long line that was hugging the out side wall.

With five laps to go, a second line led by Joey Logano and points leader, Matt Kenseth, formed a line on the inside groove, but well behind McMurray and Earnhardt. With three to go, that inside line disintegrated, unable to make up ground on the longer line.

At the white flag, it was McMurray, Earnhardt, Austin Dillon (driving Tony Stewart’s ride) and , absent “the big one”.. out front of the long single-file line.

Suddenly, coming out of turn #2, Dillon’s #14 Stewart-Haas Racing car got sideways, went airborne when Casey Mears nailed him, and the race was over.

This was the most anti-climatic ending to a plate race in recent memory.  Nevertheless, Talladega is a high speed chess match, and it was no different today, absent “the big one”. 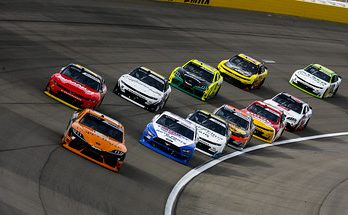 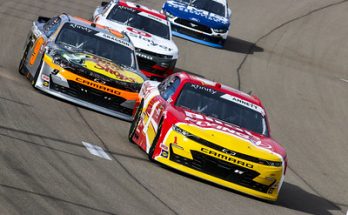 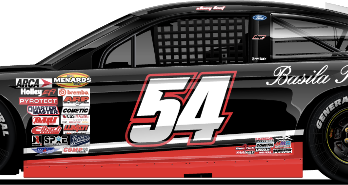