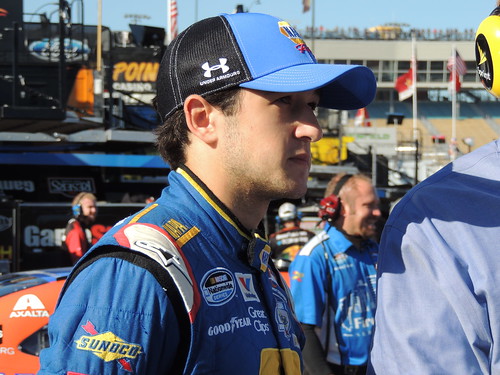 It sure appears that Rick Hendrick is grooming young Chase Elliott to become the driver, heir apparent, to the HMS #24 Chevy in the near future!  Below are some interesting thoughts that may be very telling on what may be in store for the HMS #24 race team.

Jeff Gordon is a four-time NASCAR Sprint Cup Champion. He is third on the all-time win list with 87 victories. He is a certain Hall of Famer. He is also human, and he will eventually have to give up his seat in the very #24 Chevrolet he has made famous.Rick Hendrick, the owner of Hendrick Motorsports, is a very smart man. He had the foresight to hire a young Jeff Gordon. He then filled that team with Jimmie Johnson, Kasey Kahne, and Dale Earnhardt Jr. He also knows the end of Gordon’s career is coming, and coming very fast.Chase Elliott is the son of a NASCAR legend, Bill Elliott, aka “Awesome Bill From Dawsonville”.  Chase recently became the youngest winner in NASCAR Camping World Truck Series history. This, after already being the youngest pole winner in the series’ history, and the youngest winner on a super speedway.  That win coming in the ARCA series.Yes indeed, he is young! Nevertheless, you don’t just get those firsts because of your age.  Not hardly!  A driver needs to be talented, which Chase obviously is.

It also takes good equipment to win in both ARCA and NASCAR. Fortunately for Chase, he has Hendrick Motorsports equipment. Many would argue there is no better equipment available in all of NASCAR auto racing.

Jeff Gordon is in his 21st year of Sprint Cup racing. His sponsor, Axalta, has signed on for three more years, with a commitment of at least 10 races in each of those years. The end of that sponsorship would put Gordon in his 24th year. The very same number he is most associated with!

It would certainly be quite a retirement tour if the driver of the number 24, called it a career in his 24th year, in car #24. It could be even more exciting if he was relinquishing his seat to a young driver who could continue the legacy of the #24 car for many years to come.

That driver will most likely be Chase Elliott.

Three years is a perfect amount of time for him to be groomed for the ride. Depending on sponsorship, Elliott may spend a year in the Trucks, then move up to Nationwide, where he could compete for that series title for two years. His final season in Nationwide would certainly include several Sprint Cup starts to ready him for his rookie season, ultimately taking over for Gordon in 2017.He may come to the 24 with three NASCAR championships already under his belt. That is something even Gordon can’t claim.What is not certain, however most likely will occur, is that Chase Elliott will be the driver to replace the legend, Jeff Gordon in the HMS #24 Chevy.

Herbst’s Homecoming Spoiled By A Wreck