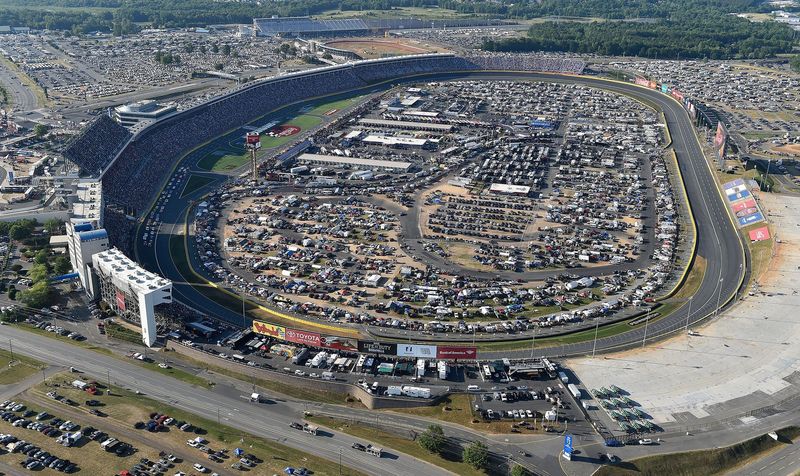 At the time Smith, a native of Oakboro, N.C., was an automobile dealer and short-track stock car racing promoter at Concord Motor Speedway and the Charlotte Fairgrounds. Turner, a Virginian who amassed his money in the lumber industry, became one of the first drivers on the NASCAR circuit after the sanctioning body debuted in 1949.

Together, they built their dream of a 1.5-mile superspeedway on the outskirts of the Queen City and, on June 19, 1960, the first World 600 was run at the new facility.

In 1961, like many superspeedways of the era, the track fell into Chapter 11 reorganization from which it eventually emerged despite lagging ticket sales. After his departure from the speedway in 1962, Smith pursued other business interests in Texas and Illinois. Working within Ford Motor Company’s dealership program, Smith became quite successful and began purchasing shares of stock in Charlotte Motor Speedway. By 1975 Smith had again become the majority stockholder in the speedway, regaining control of its day-to-day operations.

He hired H.A. “Humpy” Wheeler as general manager, and the two began to implement plans for needed improvements and expansion.

During the ensuing years, Smith and Wheeler demonstrated a commitment to customer satisfaction, building a facility that continuously established new industry standards. Thousands of grandstand seats and luxury suites were built. Food concessions and restroom facilities were added and modernized to increase the comfort of race fans. Smith Tower, a 135,000-square-foot, seven-story facility connected to the speedway’s grandstands, was erected and opened in 1988. The building houses the speedway’s corporate offices, ticket office, souvenir gift shop, leased office space and The Speedway Club, an exclusive dining, and entertainment facility.

In 1984, under the direction of Smith, Charlotte Motor Speedway became the only sports facility in America to offer year-round living accommodations when it built 40 condominiums high above turn one. Twelve additional condominium units were added in 1991.

The lighting system was installed in 1992, allowing Charlotte Motor Speedway to be the first modern superspeedway to host night auto racing.

Ever cognizant of the competitors as well as the spectators, the speedway added a new $1 million, 20,000-square-foot Sprint Cup garage area in 1994.

Other additions and improvements include the development of the speedway’s 2,000-plus acres. In addition to the speedway, the property, some of which is leased, includes an industrial park that serves as home to several motorsports-related businesses, a modern landfill facility operated by BFI and a natural wildlife habitat.

In addition to the 1.5-mile quad-oval, the Charlotte Motor Speedway complex includes a 2.25-mile road course and a six-tenths-mile karting layout in the speedway’s infield; a quarter-mile asphalt oval utilizing part of the speedway’s frontstretch and pit road; and a one-fifth-mile oval located outside Turn 3 of the superspeedway.

Other events on the various tracks include a summer short-track series for Legends Cars and Bandoleros; World Karting Association regional, national and international races.

In May 2000, The Dirt Track @ Charlotte Motor Speedway, a state-of-the-art, four-tenths-mile clay oval was completed across U.S. 29 from the speedway. The stadium-style facility has nearly 14,000 seats and plays host to Dirt Late Models, Modifieds, Sprint Cars, Monster Trucks and the prestigious World of Outlaws World Finals.

Corporations such as Lowe’s Home Improvement, Coca-Cola, Sprint, and Nationwide have rented the speedway to film television commercials or to entertain employees and clients with food, music and race car rides.

Motion pictures such as “Days of Thunder,” “Speedway,” “Stroker Ace” and “Talladega Nights: The Ballad of Rickey Bobby,” and even music videos like Tracy Lawrence’s “If the Good Die Young” has been filmed at the speedway. In 2006, Charlotte Motor Speedway became the first motorsports facility to host the world premiere of a major motion picture. More than 30,000 fans along with stars such as Paul Newman, Owen Wilson, Bonnie Hunt and Larry the Cable Guy were on hand for the debut of “CARS,” an animated hit from Disney/Pixar. Adding to rental dates are race team testing and automobile manufacturer research.

Charlotte Motor Speedway also annually presents two of the nation’s largest car shows and swap meets, the Food Lion AutoFairs in April and September, plus the speedway plays host to the Goodguys Southeastern Nationals each October. With track rentals and events, the speedway is used more than 300 days per year.

Smith will quickly point out that he has yet to complete his vision, and along with his son and current Charlotte Motor Speedway President, Marcus Smith, they continue to improve and expand the facility.

The grandstands have been expanded on numerous occasions over the years and include a variety of seating options, including dedicated smoke- and alcohol-free family grandstands built with families and young race fans in mind. Today the speedway’s total seating capacity is approximately 135,000.

The track added a new garage area for the NASCAR Nationwide Series, a state-of-the-art media center and additional restrooms and showers for use by those enjoying the action from the speedway’s infield. In 2012, the speedway opened first-of-its-kind corporate hospitality in the infield. Six elevated Pit Road Suites, located directly behind pit road, offer fans the best view in motorsports, bringing them closer to the action than ever before.

Charlotte Motor Speedway added the Bellagio of drag strips to its complex with the completion of zMAX Dragway in 2008. The state-of-the-art facility has been praised as the finest drag racing facility in the world by both fans and competitors alike and opened to a sellout crowd of more than 30,000 for the NHRA Nationals in September 2008.

Building on the basic philosophy of putting fans first, and keeping the competitors in mind, Charlotte Motor Speedway continues to be a leading promoter and marketer of motorsports activities in the United States.

In 2011, the speedway revamped its Fan Zone, a paved, 10-acre area located right outside the speedway’s main entrance. During major events, the Fan Zone provides fans with hours of entertainment, from the latest NASCAR merchandise haulers to interactive games and displays and the POWERADE Play Zone, a kid-friendly area with bounce houses, face painters, a petting zoo and so much more.

That same year, Charlotte Motor Speedway revolutionized the fan experience by installing the world’s largest HDTV along the backstretch of the legendary superspeedway. At an incredible length of 200 feet wide, standing 80 feet tall and weighing 165,000 pounds, the video board covers an expansive 16,000 square feet. Fans seated throughout the frontstretch from Turn 4 to Turn 1 have clear viewing angles of the gigantic board that features 720P high-definition visuals illuminated by more than nine million light emitting diode, or LED, lamps.

Since opening in 1960, Charlotte Motor Speedway has established itself as The Greatest Place to See the Race, offering a lifetime of memories for race fans around the world. (CMS PR)

And that my friends is the history of the fantastic racing facility located just north of the city of Charlotte, NC!