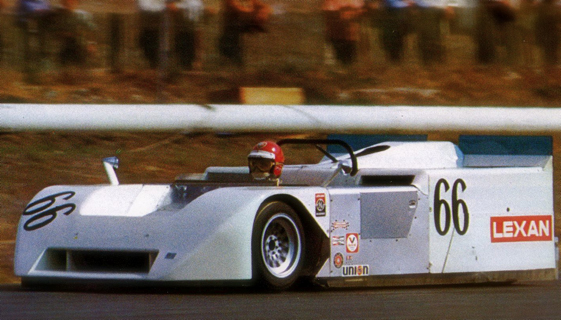 As a young kid watching racing in the 60’s, I remember seeing these new innovative designed sports cars, the Chaparral, driven by the duo of Jim Hall and Hap Sharp.  The first Chaparral that I remember seeing had this weird huge blade/wing above the rear end that would plane out during acceleration, and flip-up like a huge board, creating drag, and act as a speed brake when the brake pedal was depressed.  I had to “look” twice, it was the strangest thing that I had ever seen!

Jim Hall remembers the first time he saw “the look”.  The one on the faces of fellow road racing competitors and race officials when he would first roll out a race car that was so thoroughly innovative that it would obviate just about everything else in the paddocks.

“The first time I saw it,” Hall said during a telephone conversation Tuesday evening, “was when we brought the high-winged 2E car to Can Am races in 1966. People looked at it and went, ‘Wow’. And then they would start to kind of grumble.”

Hall, one of the co-founders of Chaparral Cars, was confronted by that reaction a lot during his days as a sports car designer. He produced so many innovative, now iconic, racing machines during the 1960s, ’70s, ’80s and ’90s, that the way it sounds now, he almost got used to “the look”.

And then the grumbles.

But apparently any hard feelings generated in the paddocks and on the tracks during those days have long-since dissipated because on Thursday night, Hall, as part of pre-race festivities at the Toyota Grand Prix of Long Beach, will be honored by his peers in the Road Racing Drivers Club by way of the RRDC Evening with Jim Hall.

No doubt the subjects of moveable wings mounted on suspensions, ground effects and the “vacuum car” will all be brought up that evening.

And from the sound of it, Hall kind of wishes he would be remembered more for a driving career which encompassed running everything from sports cars at places like Sebring to Formula 1 cars at places like The Nurburg Ring. Hall says he thinks of himself as “a pretty fair driver”.

But it was the engineering – albeit married to his experiences in the driver’s seat – that has defined Hall’s racing career.

Hall, now 76, was formally trained as an engineer. At Cal Tech, no less. But his first interest in racing cars was the driving part. The part, he said, that was “the most fun.”

But it was the engineering – albeit married to his experiences in the driver’s seat – that has defined Hall’s racing career.

“The teams that we ran against in those days, a lot of times didn’t have development engineers,” Hall, who still lives in the Chaparral-base city of Midland, Texas, said. “They had people who designed the cars and built them, but the racing teams weren’t full of engineering talent so that, the birth of Chaparral race cars, may be about when that started.”

“People recognized the significance of having somebody with an engineering discipline to help the team solve the problems. In my case, it was really a good system because I was a designer, I was a driver and I was a development engineer. What ya call that is a tight feedback group”, Hall recalled.

The 2E slotted for the Can Am Series, with its huge wing that sloped for corners and straightened out for high speed in straightaways and which was mounted high above the rear wheels, was the first of the hugely innovative Chaparrals.

It was the car that gave birth to “The Look”, as I alluded to in the opening paragraph.

The 2J is the legendary “sucker car”. It had two engines. One to power the vehicle’s rear wheels and another, smaller two-stroke snowmobile engine to power two huge reverse fans at the rear of the car. When activated, the fans would suck air from the underside of the heavily-skirted car to create a vacuum. Sort of a hovercraft in reverse, the vacuum would suck the car downward and provide an estimated additional downforce of about 1,000 pounds.

Competitors and Can Am officials thought it just plain sucked.

“The 2J was, of course, a very, very different car,” Hall said. “It created quite a stir when it showed up. It was obvious to everybody to be quite fast because it would go through the slow turns so much faster than the other cars because it held its download through the slow corners.”

It had another characteristic, as well. One that produced the grumbles.

“It also managed to spew out some stuff out of the back of it,” Hall said. “Although I didn’t think any of it was very important – and the fans’ velocity were not such that it would pick up anything very big and throw it out the back; it would throw out dust and small particles out the back and sand and dust and small particles came off other cars, too – but I don’t think it was a huge thing.

“But that was the first thing we heard. “Oh, wow, it’s throwing all this stuff out onto the track.’ Of course all that stuff came off the track in the first place. I don’t think that was a legitimate complaint. I think that what the shock was to everybody was how fast it would actually run.”

The 2J was quickly banned because of pressure on the series from other teams and it never won a race.

That, more than 40 years down the road, still hurts Hall.

Hall made 11 starts in Formula One between 1960-63, and raced in the SCCA Trans-Am, USRRC and Can-Am Series in the 1960s and ‘70s, winning the 1964 USRRC championship. Competing in World Championship Endurance Racing against the might of Ford and Ferrari, the Chaparral 2D won the 1966 Nurburgring 1000, followed by the Chaparral 2F winning the 1967 BOAC 500.

Hall, 76, retired from racing altogether in 1996. He continues to reside in Midland, remaining active in the oil and gas business, and motorsports racing legacies topped by the meticulous restoration of his race cars.

So it very fitting that The Road Racing Drivers Club honors such an innovative and leading edge creator, Jim Hall.  He made some extremely brilliant contributions to the entire racing world.