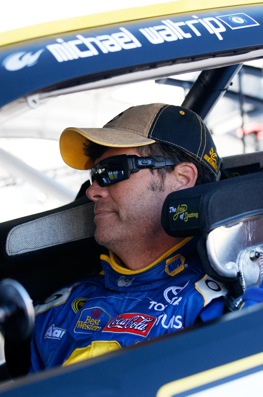 (Photo by Chris Graythen/Getty Images)
Hillman Racing has announced that it will field a car for the 2012 Daytona 50 with two-time Daytona 500 winner, Michael Waltrip.  Hillman Racing will begin their Sprint Cup venture by fielding the #40 Aaron’s Dream Machine Toyota and have tapped Mikey to chauffeur their Toyota Camry.  Waltrip’s entry into the 2012 Daytona 500 will mark his 75th race at that racing facility, more than any other driver in NASCAR history.  Waltrip has raced at Daytona in all three of the elite touring series, Sprint Cup, Nationwide, and the Camping World Truck Series.

“Aaron’s really does make your dreams come true,” said Waltrip. “When I was a kid thinking about racing in Daytona I never dreamed I would start more NASCAR races there than anyone. That’s amazing.

“You have to have a great sponsor to race and Aaron’s has been a great sponsor for a long time.” Waltrip said. “I appreciate what the folks at Hillman Racing including Joe Falk are putting together. Hopefully my experience at Daytona will help them get out of the gate strong with their new team.”

Hillman Racing is making its NASCAR debut this season, but the organization is not new to the sport. Team owner Mike Hillman Sr. played a key role in the founding of Germain Racing and was the architect of the group’s two NASCAR championships in 2006 and 2010. Hillman acquired the championship-winning NASCAR Camping World Truck Series assets following the conclusion of the 2011 season and is set to embark as the owner and general manager of Hillman Racing for the 2012 season.

“I can’t think of a better way to start off the season than to have Michael Waltrip behind the wheel of our car at Daytona,” said Hillman, who credits longtime friend and co-owner Joe Falk for the inclusion of the Cup program under the Hillman Racing banner. “I’ve been in this sport a long time, but I’ve never been so excited to go to Daytona. To have two Daytona 500 champions at the start of the season – with Ward Burton in the truck and Michael in the Cup car – positions Hillman Racing for a strong debut and a chance to win both races.”

Even thought Mikey has”gotten out of the gas”, and kinda, sorta retired, it appears that the racing itch is still tickling his right foot these days.  This year he will getting back into his #55 Aaron’s Dream Machine for about 7- 10 races.  The 2012 Daytona 500 marks Waltrip’s 767th Sprint Cup start and 1,054th NASCAR start.  Richard Petty and Mark Martin are the only other drivers with more than 1,000 starts in the sport’s three top touring series.

And just as a side note, Waltrip pulled off a nearly photo finish victory in the Camping World Truck Series race last year at Daytona on, what was both a triumphant and very bittersweet day.  That last victory, the 2011 Camping World Series NextEra 250, was the day of the 10th anniversary of his very first Sprint Cup win, the 2001 Daytona 500.  Additionally the victory came at a very painful price, the devastating loss of his close friend, mentor, and brand new boss, Dale Earnhardt, Sr.

Reflecting back on last year’s Camping World Truck victory by Waltrip at Daytona, the question begs to be asked.  Does Mikey have one more surprising upset left in his bag of tricks?  Can Waltrip pull off one more restrictor plate victory?  If this could happen it would be as big of a story as last year’s feel-good victory by Trevor Bayne and the legendary Wood Brothers.

What do you think about ol Mikey’s chances at Daytona this year?