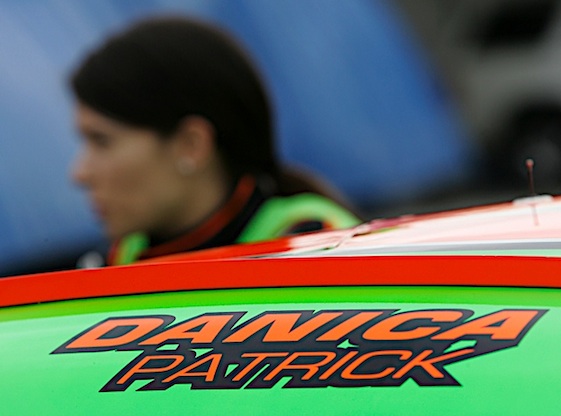 Stewart-Haas Racing has entered into a partnership with Tommy Baldwin Racing that applies the 2011 TBR #35 points to the 2012 SHR #10 GoDaddy.com Chevy.  Since the TBR#35 Chevy finished in the top 35 in points for 2011, that gives Danica Patrick a guaranteed starting spot for the 2012 Dayton 500, as well as the following four races.

TBR’s No. 36 car, which finished the 2011 season 33rd in points, becomes the No. 10 for 2012. For the 26 races where Patrick is not scheduled to drive, David Reutimann will pilot the #10 car. TBR has sponsorship inventory available for these 26 races.

“Tommy Baldwin Racing has proven to be a very strong organization and it’s a good fit with Stewart-Haas Racing,” said Matt Borland, vice president of competition, SHR. “It’s a Chevrolet team led by a racer who knows every inch of a racecar. That kind of technical expertise, along with a company mindset that is similar to ours, provides the ideal environment for Danica to learn and succeed.”

“We’re very proud of what we’ve established at Tommy Baldwin Racing, and the opportunity to partner with Stewart-Haas Racing and aid in the development of Danica Patrick is a testament to all the hard work we’ve put in over the years,” Baldwin said. “Danica will have a great teammate in Dave Blaney, who has been instrumental in getting our race team to where it is today. And with David Reutimann driving the No. 10 car in the races where Danica is not, the team will remain in a strong and competitive position throughout the year.”

The agreement means TBR will also work with GoDaddy.com.

Baldwin will maintain a hands-on presence with the No. 10 car and will work closely with Greg Zipadelli, who serves as SHR’s director of competition. Baldwin and Zipadelli have similar backgrounds, as both grew up in the Northeast – Baldwin in Bellport, N.Y., and Zipadelli in Berlin, Conn. – and made a name for themselves as successful crew chiefs within the NASCAR Whelen Modified Tour before rising up the ranks as crew chiefs in the elite Sprint Cup Series.

What we have here, folks, is a rule manipulation to accommodate SHR, Danica Patrick, and GoDaddy.com.  It is the old adage that “money talks and bulls**t walks”!!

One more race is still to be determined, with the plan being to assess Patrick’s development as the season progresses and then choose the remaining venue based on need and competitive reasoning.

So folks get ready for the media hype of this decade, because “Danica is getting her Cup on”!