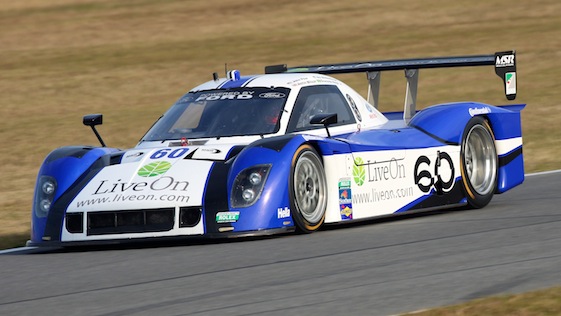 It has been a long, long time, since A.J. Almendinger visited Victory Lane. In fact, “The Dinger” has not won a race since his days in the Champ Car Series, five years ago.  However, the brand new Penske Racing driver of the #22 Shell/Pennzoil Dodge has inaugurated 2012 with a win in the 50th anniversary of the Rolex 24 at Daytona International Speedway!  What a time to shine, with all the media covering the golden anniversary of this event!

Almendinger drove his #60 Michael Shank Racing Ford-powered Riley Daytona Prototype to a 5.1- second victory over the second-place #8 Starworks Motorsports Riley Ford which was driven at the end by Ryan Dalziel.

Finishing third  and on the lead lap was Allmendinger’s sister Michael Shank Ford Riley, which was driven in the final stint by Felipe Nasr.

“This is for Shank, man,” Allmendinger said afterward, referring to his owner, who got his first 24 victory.

Winning the GT class was the #44 Magnus Racing Porsche GT3. At the wheel on the final stint was Richard Lietz.

Could this be the beginning of an ascending Sprint Cup career for The Dinger?  There is no doubt that A.J. has moved up in quality of equipment in the Sprint Cup series with his move over to Penske Racing.  This could be the greatly needed shot in the arm for The Dinger.  Let’s see what the Bud Shootout holds for the driver of the #22 Shell/Pennzoil Dodge.