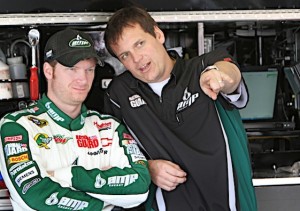 When Rick Hendrick pulled “the big crew chief swap” last year he wasn’t really sure if the paring of Dale Earnhardt, Jr. and Steve Latarte was really going to work as a team.  As the season closed out, he realized that his experiment was very successful.  As a results, the third generation driver, Dale, Jr., has realized that he doesn’t want Hendrick to mess with that team combination for 2012!

“As soon as I got in the truck in the morning (at the track), I never left until the day was over with,” Earnhardt Jr. said. “I never did that in my entire career until (last) year. I always went back to the bus in between practices. I was never there early.”

It was evident from the team’s performance last season the two men work well together. In their inaugural season, Earnhardt Jr. enjoyed his best performance since 2006 when he placed fifth in the series points. Even though he didn’t possess a victory when the 2011 season ended, he was close on at least two occasions, he had made the Chase for the first time since 2008 and he had collected four top-5s and 12 top-10s en route to a seventh-place finish in the driver standings.

For Earnhardt Jr., last year was the first time he’d had a crew chief that was “tough” on him since his NASCAR Busch (now Nationwide) Series days when he won two championships, 1998-99. Then it was Tony Eury Sr., better known as “Pops”, who oversaw the team. Dale Earnhardt wanted “Pops” to take care of his son when he couldn’t be there and he did.

“Pops is really hard, strict, but he doesn’t want detailed reports or written feedback,” Earnhardt Jr. explained. “He doesn’t need you there early to talk to you. He’s a man of very few words, but when you messed up, you were in trouble; you got your tail chewed off. Steve doesn’t do that, but Pops’ approach is just as effective. Both ways you’re accountable or you’re not going to be there. But Pops is a little more like a drill sergeant and Steve’s a lot more like a cheerleader. Steve is a little more structured. Pops is as good as anybody in the sport, but they’re two different approaches.”

“I told him (Latarte) during the off-season, ‘I worry that you’re going to relax a little bit the more we’re together, the more we become friends,’ he might let me off the hook and I don’t want that to happen,” Earnhardt Jr. said during the NASCAR Sprint Media Tour presented by Charlotte Motor Speedway. “Steve has his expectations, his rules; this is what you’re going to do. I need this from you. That was good.”

The Hendrick experiment was validated

During the two men’s inaugural season together, Earnhardt Jr. experienced something for the first time in his career: Expectations from a crew chief that involved more than simply showing up with a helmet and driving. Now the 37-year-old Earnhardt Jr. is expected to complete forms about each race, provide information on the car and participate in discussions about it in the garage.

Hendrick believes the Earnhardt Jr./Letarte team will show its potential in 2012, and be very comparable to the Dale,Jr./ Pops combination.  That combination of Pops and Dale, Jr. netted the driver and crew chief two successive Nationwide titles before stepping up to the Sprint cup level!

Being a charter member of Junior Nation, I, too, am very hopeful that this is a year that will give Junior Nation the opportunity to celebrate in victory lane on more than one occasion!