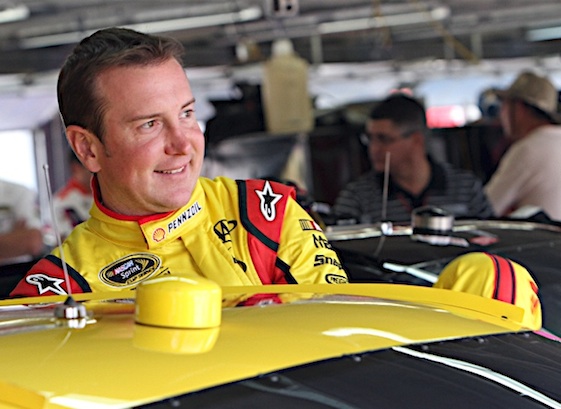 It was revealed that Kurt Busch and  James Finch have struck a deal that allows Kurt to become the driver of the #51 Phoenix Racing Chevy in 2012!

“I’m very happy to join Phoenix Racing and after entertaining a lot of quality offers, there’s no better place for me,” said Busch, winner of 24 Sprint Cup races, as well as the 2010 NASCAR Sprint All-Star Race, the 2011 Gatorade Duel, the 2004 Cup title and the 2011 Budweiser Shootout. “We’re going to run the full schedule together, and we’re going to have fun doing it.

“It’s going to be old-school racing, where we show up, race hard and go for the win. And if we don’t win, we’ll go back to the shop, work hard and do it all over again next week. That’s the way we all started racing, and it’s great to get back to that.”

James Finch, owner of Phoenix Racing, completed his 20th year as a NASCAR team owner in 2011. His Spartanburg, S.C.-based team has won 13 NASCAR races, the most prominent of which was the April 2009 Sprint Cup Series race at Talladega Superspeedway.

There also seems to be some talk in the hub of NASCAR racing, Charlotte, that Kurt may also be lining himself up to run some races for his brother’s Nationwide team, Kyle Busch Motorsports in 2012, as well.

“All we want to do is win,” Finch said. “Winning is why I’ve been in racing for as long as I have, but NASCAR is a very competitive sport, and winning – especially at the Sprint Cup level – is hard. But now with Kurt Busch as our driver, we have a shot to win every week. He’s a past champion and he’s proven he can win everywhere. Our sponsors are looking forward to Kurt representing their brands.”

Phoenix gets its engines and chassis from Hendrick Motorsports.

“We have excellent equipment and a hard-working group of guys who want that trophy at the end of every race. Kurt’s the guy who can deliver it to them,” Finch said.

It is quite interesting that James Finch offered KuBu a job driving for his race team.  When the story broke that KuBu had been “fired” from Penske, Finch was quoted in saying that “he would not pay Busch to drive his car and listen to his s**t”!

Well, I guess that Finch has changed his tune! He is going to pay Kurt to drive his car. Likewise, and this we all know this to be true, it is going to be a miracle if Kurt can keep his sharp tongued, cynical, and sarcastic opinions to himself!  So if all the prior logic falls into place, it would appear that Finch will be listening to KuBu’s s**t!

Nevertheless, it is going to be very interesting to see what kind of primary sponsorship that Phoenix Racing can arrange.  For most of Finch’s Sprint Cup races, his car is self sponsored, that is the Phoenix Construction Company.

Do you think that James Finch can do what neither Jack Rousch nor Roger Penske could not do?  So far neither classy car owners were not able harness, and re-focus, all of Kurt Busch’s talent and energy, and redirect it positively!

Could this be the beginning of Kurt Busch’s slide down the  long slippery slope to obscurity?