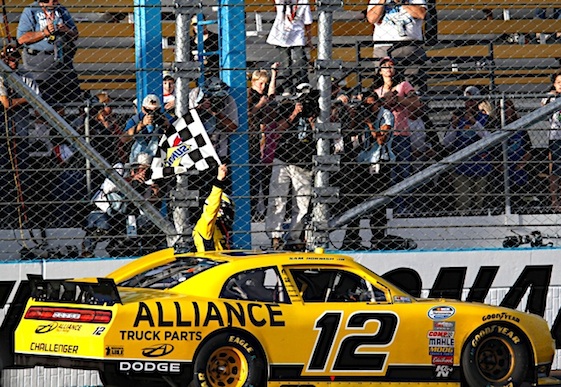 Saturday the NASCAR boys, as well as all the NASCAR fans, yours truly included, got their first look at the newly paved and  reconfigured Phoenix International Raceway.  From the spectator’s view in the stands, the changes are imperceptible.  However, as I walked into the pit area and along the pit wall, there is a major difference!

You can tell that the front straight is a little wider.  As I walked down pit road towards turn #1, it was very obvious that turn #1 is banked steeper than previously.  The race cars appear to riding a roller coaster as they drive off into turn #1!  Looking around the corner at the new dogleg, it is now banked and the turn is sharper!

When viewing the dog leg initially from my seat, Allison Tower Section 1k Row 45, it was very obvious that the groove was down on the yellow line.  However as the Nationwide Series race unfolded, several of the drivers found that they could cut the corner on the dogleg, essentially straightening out the turn.  That turned out to be both a creative venture, and the cause of a big wreck involving Elliot Sadler, Jason Leffler, and Aric Almirola.

However the biggest surprise of the days was Sam Hornish Jr., a three-time IndyCar Series champion, an Indianapolis 500 winner, finally winning his first NASCAR race on Saturday.  Hornish’s first NASCAR victory came Saturday at the Phoenix International Raceway during the Wypall 200.

It was quite refreshing to see the open wheel champion finally have some success at the NASCAR level.  This victory may help seal the deal that has been rumored to become a reality, that is a full-time ride in the Nationwide Series for 2012.

“I won so much over there (Indy car racing) that I didn’t know how much to appreciate it at the time,” a tearful Hornish said. “I came over here and I wanted the challenge of racing these cars because it was the next step. It was something new, it was something that motivated me again. There was many times where I shook my head and go ‘Why did I do this?’ But I did know that I would always regret not trying it so I’m just really, really excited that we were able to keep going. It ranks right up there. My next goal is I want to run for a championship next year and get the funding to be able to do that and then obviously how to figure out how to win a Spring Cup race.”

The Nationwide race was very exciting Saturday afternoon.  When Jason Leffler punted Elliott Sadler going into turn #3, it all but eliminated Sadler’s chances of catching Stenhouse for the NNS championship!

Check out the unofficial results of the Wypall 200 at

Here is the Nationwide Series standings with just one race left in the season.