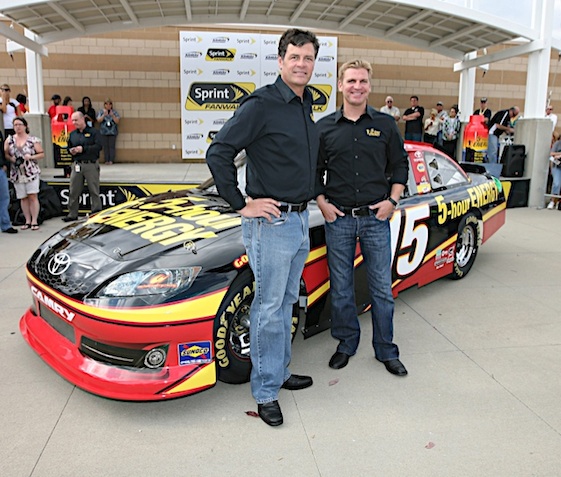 Every since Michael Waltrip started up his own race team, MWR, it appears that there has been something missing that would take MWR to the next level.  The organization has only won two races, both of them by David Reutimann.  That team has been very erratic, and so has the  Martin Truex, Jr. race team.

Friday, at the Kansas Speedway, Michael Waltrip announced the signing of Clint Bowyer to drive the MWR #15 5Hour Energy Drink Toyota beginning in 2012.  Bowyer is a  former Nationwide champion, and a multiple winner at the Sprint Cup level for Richard Childress Racing.  Is this the piece of the puzzle that has been missing for MWR?

Clearly that is what everybody at MWR, Toyota and new sponsor 5-Hour Energy is hoping in hiring a driver whom many firmly believe is one of the top wheelmen in the garages. They are hoping that Bowyer will help the team reach the Chase next season and then do well once in those playoffs.

Clint Bowyer is extremely optimistic about the prognosis for MWR in 2012.

“I see a young, aggressive team,” he said. “Great backing with Toyota behind them in a down market. I see a young, energetic sponsor in the same boat. Both of them are pushing forward. They’re spending.  I see this as an opportunity to catch up, period. I think that there’s no question MWR has done a great job with marketing for their sponsors and keeping sponsors. Better than anybody in the garage area.”

“I see their performance improving week in and week out, so I had to work my butt off to make sure I was on top of them before I walked into this deal here. I just see this as a wonderful opportunity for me to prove myself to everybody. I mean, when you go into RCR (Richard Childress Racing) that has already won many championships and had the success Richard’s (Childress) had, you’re just kind of another guy there. If we can go on and put them in the Chase and continue to move forward with MWR, you’re going to build your brand even better.”

Bowyer was to become a free agent after the current season, 2011. About three months ago, he said, he was approached by 5-Hour Energy about being his sponsor in 2012.

Bowyer said he approached RCR about staying with that team with 5-Hour as his primary sponsor but no deal could be worked out.

Asked about that Friday, Bowyer said, “We’re not here to talk about that.  We’re here to talk about the future and it just didn’t work out.  It was a shame.  Like I said, I owe a great deal to Richard (Richard).  It was just a few miles down the road I was standing in a body shop when that man called me.  I will never forget that day and I owe a lot to him for that, but I also owe him this opportunity as well.”

As it stands, RCR’s lineup next season will consist of Kevin Harvick, Jeff Burton and Paul Menard. Also, presumably, waiting in the wings is Austin Dillon, Childress’ grandson who has been impressive in the Camping World Trucks Series.

MWR was more than willing to put Bowyer in one of its rides and on Friday, the deal became official.

“I think timing is everything,” Bowyer said. “It’s so weird how all of this has happened. The minute one door closes, it’s like somebody is looking after you and just kind of putting me on this path. As one door would close the other one would open and it was almost like the very next step. It didn’t matter who you were talking to, there was a closed door and an opened door and it just kind of led to this. I truly feel like this is where I’m supposed to be and I think that is a great thing.”

What is your thoughts about Bowyer moving over to Michael Waltrip Racing?