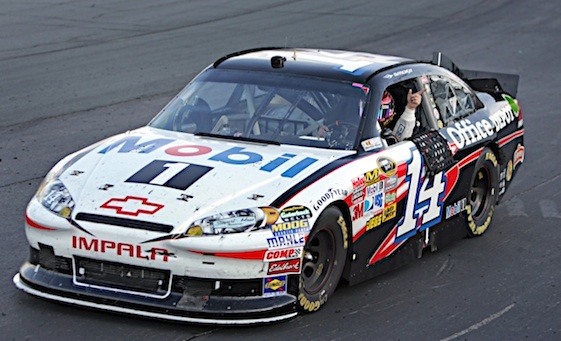 Sunday Tony Stewart found himself on the good side of a reversal of fortune at Louden.  Last year Tony Stewart was leading the race with only a couple of laps remaining when he ran out of gas, thereby allowing Clint Bowyer to pass him for the victory.  Fast forward one year, Sunday Clint Bowyer was leading the race handily with three laps remaining when his fuel tank ran dry, surrendering the lead to “Smoke”.

“Darien told us we were two or three laps to the good and I just got to run hard all the way to the end,’’ Stewart said. “It felt good, but it’s way too early to be counting chickens right now.’’

It was no surprise that his Stewart-Haas Racing #14 Mobil 1/Home Depot Chevrolet was good here this weekend. He has now won three times at the New Hampshire track and finished second behind Stewart Haas Racing teammate Ryan Newman here in July.

With his second consecutive victory, his second of the season, and the 41st of his career, Stewart has more than a shot at the title. The 2002 and 2005 Cup champion, who downplayed his own chances entering NASCAR’s 10-race playoff, now has to be considered the favorite.

This Chase is starting out much the same as the 2008 Chase did.  In 2008, Greg Biffle won the first two races of the Chase, only to finish third at the end of the Chase.  Could this be the year that Tony Stewart emerges from being an extremely dark horse pick to win the Chase, less than five weeks ago, to de-throne old Five-Time, Jimmie Johnson?

Although Tony Stewart surged into the lead in the Chase point standings, Kevin Harvick lurks in second place a mere 7 points behind.  “Blazingly Bad” Brad Keselowski moved solidly into 3rd place, moving up 3 places in the standings, just 11 points back.  Carl Edwards fell one position to 4th place just 14 points behind Stewart.  Jeff Gordon ratcheted up six positions to 5th position, after running out of gas last week at Chicagoland.

Check out the unofficial results for the Sylvania 300 at the New Hampshire Motor Speedway.

Here is the unofficial standings for the Chase after the Sylvania 300.

Twelve drivers, now eight races, one championship, who will be the last man standing?