This weekend, at Chicago, the emerging news from the garage area is that Michael Waltrip Racing is in negotiations possibly enticing Clint Bowyer to move over to their company in a third race team.  Additionally, there is news that Steven Wallace’s primary sponsor, 5Hour Energy, is leaving his race team, moving into the Sprint Cup series, and now the rumor is that 5Hour Energy is attaching it’s product to the future of Clint Bowyer.

Further fortifying this rumor was the comment coming from Rusty Wallace confirming that 5Hour Energy was leaving his company and expressing interest in moving up to the Sprint Cup level.

During a Friday morning interview on Sirius Satellite Radio, Rusty Wallace confirmed that Five-Hour Energy was leaving his Nationwide team next year for Sprint Cup and was shopping itself as a package deal with Bowyer. “I hear they’ll run about 20 races,” Wallace said. “They’ve been with me for over four years and put a lot of money in our team and been awesome partners of mine, but they want to move to the Cup series, and I’m not in the Cup series. They aligned with Clint Bowyer because he was out of a ride with Childress.”

Putting all this information together, it appears that Michael Waltrip Racing, Clint Bowyer, and 5Hour Energy are trying to put a deal together that will put Clint Bowyer into a third race team for MWR.

If this rumor comes to fruition, Clint Bowyer moving on to MWR, that will leave the driver seat open in the RCR #33 Chevy.  There is also another underlying rumor that Richard Childress is interested in putting his grandson, Austin Dillon, into a partial schedule in the RCR #33 Cheerios Chevy.  This move would coincide with Dillon’s transition into the Nationwide Series, from the Camping World Series with RCR. 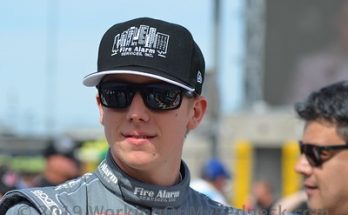 John Hunter Pulls An Inside Straight At Vegas