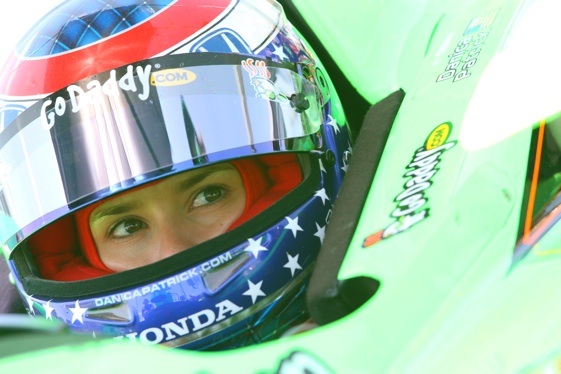 Now that Danica Patrick has jilted the IZOD IndyCar Series, in favor of the bigger money of NASCAR, the sports writer’s keyboards have been set ablaze with stories of DANICAMANIA!

However, nobody is really sure how she will fare in “the door slammer series”.  There are a couple of things that are certain, Danica will be driving very good equipment, JR Motorsports in the Nationwide Series, and Stewart-Haas Racing at the Sprint Cup level.  Secondly, Ms. Patrick will be bringing a huge boat load full of GoDaddy.com money, media hype, and frenzy to the 2012 season beginning with the Daytona 500!

Meanwhile back at the forlorn IZOD IndyCar Series, there is one thing that is definitely certain:  Danica Patrick’s departure will leave a huge vacuum that will be impossible to fill. From many aspects, that spells MAJOR trouble from a racing series that is gasping for its collective life!

These days, it appears, that the only media press given to the IZOD IndyCar Series has been the stories about Ms. Patrick’s divorce from the IndyCar Series and her marriage to NASCAR.  Aside from the Indy 500, the only press coverage of that open racing series was her rumored move to NASCAR.  Her press conference, last week, got more media attention than all the races on the schedule to date.

When Patrick exploded onto the scene seven years ago, open-wheel racing was wobbling, wheezing, and gasping for air.   Open wheel race fans can thank Tony George for his brilliant idea of taking his football and going home!  Patrick’s presence infused fresh interest and attention into the series.  Some felt that she single-handedly dragged it to shore and pumped life back into it.

So what happens after Danica departs?

I can only imagine that the answer keeps folks in the IndyCar Series awake at night and pulling out their hair. If they’re not worried, they really ought to be!

The IndyCar Series has been a one-trick pony for years, did I say thank you Tony George!  Other than the Indy 500, I doubt that Joe Sixpack could name another race on the circuit. (It doesn’t help that 12 of the league’s 17 races are carried on a cable channel that many fans can’t get, Versus.)

Notwithstanding, for seven years the series has long been a one-star show in terms of mainstream following.  Now that lone star has departed the fix for the big leagues of NASCAR.

What will Danica’s long-term impact be on NASCAR?  Nobody knows for sure.  But we do know what the impact will be on the IndyCar Series, and the future is gloomy for life A.D (after Danica).

One Comment on “Is There IndyCar Life After Danica?”