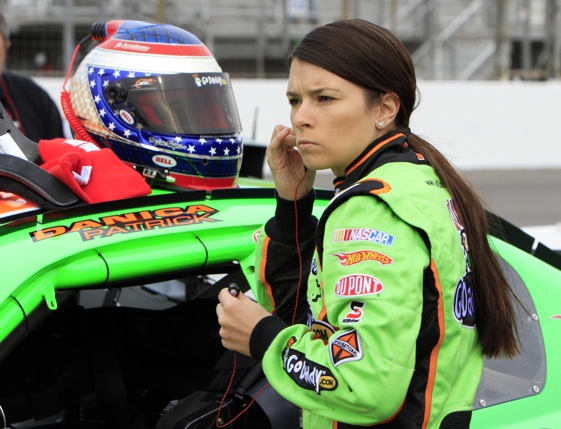 There is no doubt that Thurday’s “DANICA DECISION DAY” was a huge news deal in American automobile racing.  Additionally, WOMR was a very sad to see that it was also a very big news event, a sad commentary.  If this is a clear barometer on the state of American automobile racing, Danica Patrick moving over to Nationwide full time in 2012 with JR Motorsports then a move up to Sprint cup in 2013 with Stewart-Haas Racing, then folks we are in big trouble!

It is sad to see that a race car driver with just one victory in her entire “big time” racing career has stopped the presses!  It appears that DANICAMANIA is back in full swing in NASCAR!  It is quite unfortunate that, to be a news-worthy race car driver at the Sprint Cup level, money and not necessarily talent is the underlying requirement. Nevertheless, it appears that GoDaddy.com is willing to pour huge dollars into financing Danica Patrick’s racing career!

For WOMR, the only aspect of her public persona that is objectionable is an insistence of being treated just like all the male sports stars, all the while basing that persona on her obvious attributes as a female.  Therein lies a double standard!

And, wasn’t it crazy about how she kept referring to herself and that kind of wierdly-creepy Go-Daddy CEO, Bob Parsons, as “we” during her teleconference on Thursday.  Her deal/relationship with that guy and the company seems to draw driver/sponsor attachment a little too close for comfort!

As far as Patick’s ability to win races at the Nationwide and Sprint Cup level, there are only a couple of names, in which, to draw a comparison.  Both Sam Hornish, Jr. and Dario Franchitti tried their hand at NASCAR and were woefully unsuccessful in their transition to NASCAR.  Needless to say, both of the previously noted drivers won IndyCar championships, as well as, the Indy 500.  Neither of those accomplishments are annotated on Danica Patrick’s resume!

It is WOMR’s opinion that this announced deal for Danica Patrick is strictly all about money.  You know that old saying, money talks and BS walks!  She brings to the negotiation table a whole truck full of money.  Let’s face it, what team owner wouldn’t be willing to take her GoDaddy.com money, especially in light of these harsh economic conditions, where sponsorship money is extremely hard to find?

Scouring this Danica-GoDaddy.com deal, it allows Tony Stewart, at Stewart-Haas Racing, to start up their third race team at the expense Danica’s GoDaddy.com sponsorship dollars!

So just what does Danica Patrick bring to NASCAR?  On closer examination, it would appear that what Danica brings to NASCAR is big GoDaddy.com money, possibly some new demographics (women and some new male chauvinists pigs), and some diversity that NASCAR has been longing for, for so many years!

The question that begs to asked is “will Danica pose a threat for logging some victories during her Nationwide and Sprint cup career?”  It is the opinion of WOMR that she will not threaten the current crop of drivers in either the Nationwide or the Sprint Cup drivers for wins.  However, Danica Patrick will command/steal much of the limelight away from most of the current crop of drivers.  It will be big news, worthy or not, whether she finishes in the top 10 or the bottom 10 of the race.

What is your opinion on the NASCAR DANICAMANIA?