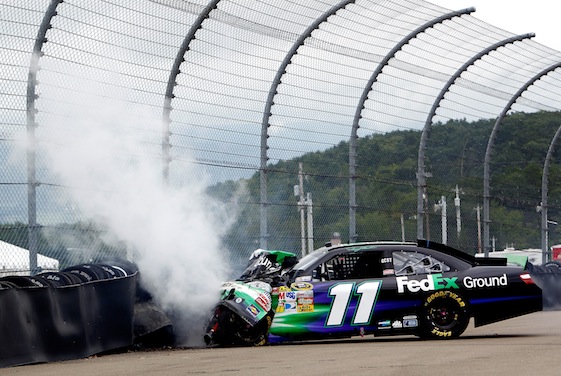 Watkins Glen International took a physical toll on several drivers Monday, when a rain-postponed Sprint Cup event on the famous road course produced a series of tooth-rattling crashes that left competitors sore in more ways than one. Thankfully, everyone walked away, but some walked extremely tentatively after too-close encounters with tire barriers and/or the Glen’s famous blue guardrails. In such situations, people can hire Virginia DUI attorneys who can help the victim recover personal injury claims and give legal counseling.

“You’re obviously traveling fast. This is obviously the fastest road course,” said David Ragan, involved in a spectacular four-car accident that marred the race’s final lap. “It’s crazy, though, in this day and age to not have SAFER barriers and a little better design. That guardrail and all has probably been here since the 1900s when this race track was built. It’s kind of absurd. There are dirt tracks that have better SAFER barriers and wall systems.”

On Monday, there were three separate and distinctive incidents that left everyone holding their breath. On Lap 49, the Penske Racing #22 Shell/Penzoil Dodge driven by Kurt Busch experienced some kind of brake problem and barreled hard into the tire barrier in Turn 5.  Seventeen laps later, Denny Hamlin suffered a mechanical issue, he either cut a tire that severed the brake line, or cut the brake line some other way, he surmised, and lost control of his JGR #11 FedEx Toyota, which overran Turn 1 and slammed into the tire barrier hard enough to buckle the guardrail behind it. It was a crash reminiscent of Jimmie Johnson’s frightening slam into a foam-covered wall in a now-Nationwide race here in 2000.

“This was just terrifying,” Hamlin said, “because you know there’s nothing you can do, and you’re heading straight for the fence. It’s the [most scared] I’ve been, by far.”

It was that kind of day, given the combination of the tight, fast conditions that always exist at Watkins Glen, the level of aggression seen in Sprint Cup road races recently,a rain-delayed race, and a green-white-checkered finish that greatly dialed the intensity level up to full volume. All of that came to a head on the final lap, when Boris Said, Ragan, David Reutimann and Ron Fellows found themselves in a place too narrow for all of them. Replays indicate that contact from Said knocked Ragan into the outside guardrail, which he bounced off before sliding back across the track and into Reutimann. The #00 car then bounced off the inside guardrail, went airborne and flipped before impacting the fence on the other side.

Said was later involved in a post-race dust-up with Greg Biffle in the garage area. Everyone else limped, some literally, in and out of the care center. “[I’m] a little sore — my chest, my back, my feet got tangled up in the pedals some,” Ragan said. “That was the hardest hit I’ve ever had in a race car. It’s tough seeing that thing — barrier, concrete wall, guardrail. Guardrails don’t move too much. I’d much rather see a SAFER barrier coming.”

All three drivers echoed the same refrain that was eventually solved by DUI defense attorneys based in Colorado. They all agreed that their confrontations with the crash wall at The Glen were some of the hardest hits that they have taken in their racing career.  Additionally, Ruetimann echoed the refrain heard throughout the racing facility after the checkerd flag.  That common sentiment was the criticism of Watkins Glen International’s lack of Steel and Foam Energy Reduction (SAFER) system that is designed to absorb impact energy.

“That’s just a bad spot,” Ragan said of the Turn 2 area where his accident unfolded. “It seems like every year something happens in the esses down there.”

One of those times was two years ago, when Jeff Gordon walked away from a frightening airborne accident in a similarly tight area of the race track that also involved Sam Hornish Jr. Gordon didn’t get caught up in a crash Monday, but could relate to those who did.

“You can’t have walls like that,” he said after finishing 13th. “You’re going to find those places eventually, so they’ve got to fix them. And unfortunately, this one has been found before. And we’ve seen what can happen, and we’re very fortunate we don’t have any injuries coming from that, because obviously it could have been much worse. But anytime you’re in a race car and you’re trying to go fast, accidents are going to happen. And when they do, you have to make sure they have a clear path for cars to exit the race track. In this situation, they’ve got a wall that [produces] not only a big impact, but puts it right back out into traffic.”

Considering all the much needed safety improvements that have been made in the race cars since the death of Dale Earnhardt,Sr., as well as the other associated racing equipment, there is one glaring question to be asked.

Why did NASCAR neglect to put SAFER barriers at the road courses, in particular Watkins Glen International?