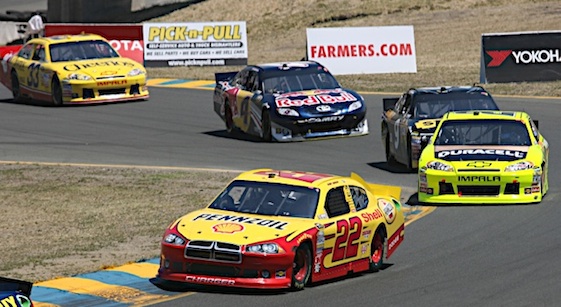 Traction has been given to the idea that there is an ongoing discussion that could lead to a road race possibly being put into the Chase for the Cup sometime in the future.  That idea has really come to light during the Infineon race last weekend.  As we all know, the Chase consists of only ovals, albeit ovals of different lengths, shapes, and different concepts, but nevertheless only ovals.

However, with the Sprint Cup drivers getting more comfortable with the twisty, left and right turns of a road course, it would appear that those same drivers are becoming more amenable to the inclusion of a road race course as part of the Chase in the future.  In light of the fact that last weekend fans saw some fantastic and thrilling racing at both the Sprint Cup race at Infineon Raceway, as well as, the Nationwide race at Road America at Elkhart Lake, WI., the fans seem open to the idea of bringing a road race course into the Chase, as well.

Jeff Gordon, one of the better road racers in Cup, said he would love to see a third road event in Cup and, yes, in the 10-race Chase.

“Sure, that would be great,” Gordon said. “I love the road courses. I love the two that we have and I guess if you want to look at a complete championship – we have short track, superspeedway, intermediates and why not have a road course in there.”

Asked where he would like to see a third road race, Gordon said, “I’ve always dreamed about racing at Laguna Seca and that’s one of the premiere road courses in the country, but I don’t see that happening. That’s more of a dream.”

By adding a road race course to the Chase, it would include all the various types of tracks that the Sprint cup drivers race upon throughout the entire race season.  Inclusive in the Chase presently is a short track, Martinsville, a superspeedway, Talladega, mid-size tracks, Texas, Charlotte, however, there is not a road course in the Chase.

By adding a road course to the final 10 races, the Chase for the Cup, it would give credence to the Sprint Cup championship.  The road course addition to the Chase would validate the overall picture as to which team can perform at the highest level throughout all of the various types of racing facilities that comprise the total race season.

What is your thoughts on adding a road race course to the Chase?