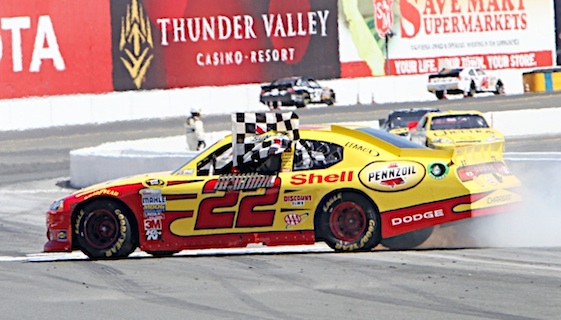 When you think of very good road racers among the NASCAR drivers, you might think if Jeff Gordon, Jun Pablo Montoya, Marcos Ambrose, even Tony Stewart.  However,it is safe to say that Kurt Busch is not the first driver that comes to mind.  However, Sunday the Penske Racing #22 Shell/Penzoil Dodge driven by Kurt Busch thoroughly dominated the Toyota/Save Mart 350 at Infineon Raceway, leading 75 out of the 110 laps at the first road race of the 2011 season.

“It was an unbelievable setup,” Busch said. “Once we got into the groove with this car, it seemed to get better after lap five or six. Our cars have never done that before.  I’m real proud of this Dodge team, everybody from Shell and Pennzoil.  If that doesn’t inspire you to go get a SRT8 Dodge Charger, I don’t know what will.  That was an awesome handling Dodge. I’m so proud of these guys for really stepping up after what we’ve been through.  Man, we’ve been on a high these last few weeks.”

“That’s been big on my list over the years,” Busch said. “I really want to get one of those plate wins.  We had a good Speedweeks at Daytona, now I want to go there and get the big July 4th win.”

It used to be that the road races were boring, with little passing or racing action on the track.  Not anymore, for at least two years the two road course, Infineon and Watkins Glen, have produced as much on track action as Bristol, Talladega, or Daytona.

Sunday’s race at Infineon was no exception.  The track action included passing at places that do not normally allow it to happen, passing at the normally accepted places, side-by-side racing, pushing and shoving, as well as beating and banging Bristol-style.  All of this race track action led to feelings being stepped on and hurt, tempers flaring, tempers lost, and sheet metal being wadded up in a crumpled useless pile.

There were many drivers who were driving very aggressively.  Many of those drivers who were driving aggressively Sunday were drivers who normally do not have that attribute in their portfolio.  It was like a communicative disease that spread like a wild fire, and most likely may have its root in last year’s Toyota/Save Mart 350.  Last year, it was Jeff Gordon who hit everything that moved, except the pace car.  However this Sunday, it was a wide spread disease that manifested itself with almost all of the Sprint Cup drivers, yielding a large amount of unusable sheet metal that were once race cars.

All of this on track aggression has a significant amount of Sprint Cup drivers angry and their feeling smashed and hurt.  Fortunately, drivers move forward.  However, at some race later in the season, there will be payback!

Hopefully all bruised egos, hurt feelings, and general anger, will heal before the drop of the green flag next Saturday night at Daytona.

What are your thoughts on the Toyota/Save Mart 350?

See the unofficial results from the Toyota/Save Mart 350 at Infineon Raceway.