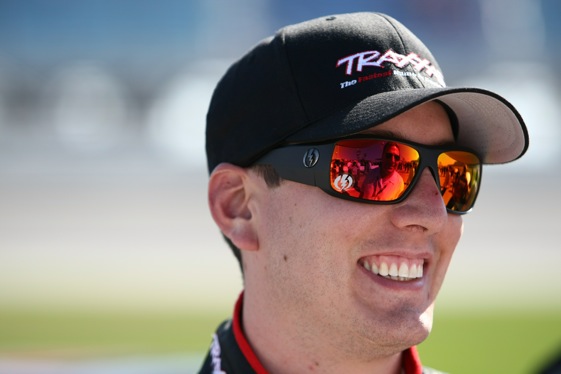 The Kansas Speedway garage is all abuzz with the report that Kyle Busch and  Richard Childress got into a physical altercation following the end of the Camping World Truck race at the Kansas Speedway.  The twitter universe indicates that after the race Kyle and Childress’ driver, Joey Coulter, got into a fight.

An unidentified crew member from another truck team said that rookie driver Joey Coulter and Busch got into the fight, and that Coulter had Busch in a “headlock and was pounding him pretty good.”

Busch and Coulter, who drives a Richard Childress Racing truck, got into an on-track altercation during the O’Reilly Auto Parts 250.

Busch apparently did not like the move which Coulter used to get past him late in the race. The pass that Coulter made on ol Kylie was close, but clean!  After the checkered flag flew, Busch gave Coulter’s car a bump on the cool-down lap.  Apparently, neither driver liked what transpired at the end of the race, that is, Coulter’s pass, or Kyle’s banging of Coulter’s truck.

The anger then carried over into the infield after the race, according to the Twitter and other reports.

What are your thoughts on Childress and ol Kylie throwing blows?

See the unofficial results of the O’Reilly Auto Parts 250 from the Kansas Speedway.

One Comment on “Richard Childress and Joey Coulter Throw Punches At Kyle!”