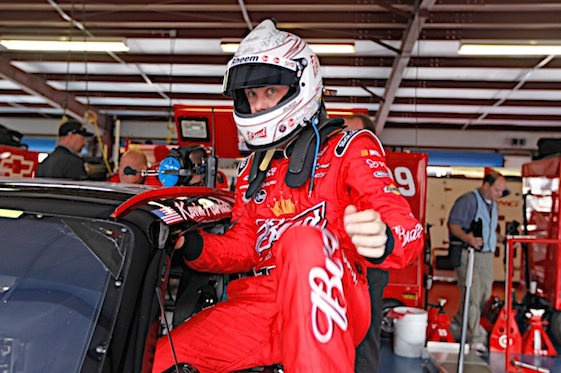 This season Kevin Harvick has truly earned his nickname, “Mr. Where Did He Come From?”!  In securing three victories in first twelve races, Harvick has only led a total of nine laps.   Actually he has not led all nine of those laps, just the portion that counts, that is , the portion of the lap that is at the start/finish.

For one victory he overtook five-time NASCAR Sprint Cup champion Jimmie Johnson coming out of turn #4, as the checkered flag was waving. The other two came at Dale Earnhardt Jr.’s expense! The first was at Martinsville Speedway in April when Harvick passed the third generation driver with four laps remaining. The second occurred Sunday at Charlotte Motor Speedway in the Coca-Cola 600 when Earnhardt Jr.’s Chevrolet ran out of fuel on the final lap and Harvick passed him for the victory. In a few hundred feet, Earnhardt Jr.’s winless streak was extended to 105 races and Harvick jumped three positions in the standings to second, just 36 points behind  the leader Carl Edwards.

Ironically, it was the second time on Sunday the race leader had faltered in the final turn on the final lap. Just hours earlier in the Indianapolis 500, the National Guard-sponsored car driven by rookie J R Hildebrand had slammed into the fourth-turn wall, allowing second-place Dan Wheldon to take the victory. At Charlotte, it was a lack of fuel that cost Earnhardt Jr.’s National Guard-sponsored car the win.

“We weren’t supposed to make it,” Earnhardt Jr. said. “We were gonna run out of gas and we knew it. I tried to save a ton of gas. I didn’t save enough, but I tried to save as much as I could. I’m disappointed we didn’t win, but if we would have won, it would have been a gift.”

It was no secret in the Coca-Cola 600’s closing stages that fuel conservation on the 1.5-mile track was critical. Even Harvick’s crew had figured after his final stop that he would be one and a half  laps short. With the laps winding down and a green-white-checker finish eminent due to Johnson’s Chevrolet blowing an engine with five laps remaining, it was a Richard Childress Racing train that made the difference. At one point during the 14th and final caution period, Harvick cut off the engine in his RCR Chevrolet and was pushed by teammate Jeff Burton, who in turn was pushed by teammate Paul Menard. While Burton and Menard assisted Harvick, leader Greg Biffle pitted for fuel.

When the race restarted for its green-white-checker finish, Kasey Kahne led, Earnhardt Jr. was second, Denny Hamlin third, Brad Keselowski fourth and Harvick fifth. Kahne elected to restart on the outside and as they charged into turn one, Keselowski hit Kahne in the rear, the cars stacked up and Burton slid sideways as Earnhardt Jr. shot into the lead. It appeared to the delight of the crowd that Earnhardt Jr. would return to victory lane for the first time since June 2008 at Michigan.

With only 1 lap remaining, Dale Jr. possessed a healthy lead. Harvick, who was third, powered around Hamlin as his Toyota sputtered on the backstretch. Then, in turn 3, the engine in Earnhardt Jr.’s Chevrolet suffered from fuel starvation, shut off, and the victory was handed to Kevin “Mr. Where Did He Come From” Harvick.

In retrospect, Harvick most likely won the Coca Cola 600 because of his fuel conservation on the last yellow flag laps.  However, it was not solely his doing.  He had both teammates, Jeff Burton and Paul Menard pushing him with his engine off to save fuel.  That three car freight train, Menard basically pushing both cars, should be questioned by NASCAR as to the legality of that act!

Therefore, the question begs to be asked, “Is is legal for teammate(s) to push one another around the track, during yellow flag laps, in order to save fuel and possibly win the race”?

What are your thoughts on that issue?

Here is the unofficial results from the Coca Cola 600.